What does it take to create a racing program these days? How about a dream and a nearly endless supply of

Brett Madsen, an SCCA autocross national champ with a pair of high-output Mustangs in the stable, came up with Spec P71, a Southern California time attack series for decommissioned Ford police cruisers and similar sedans.

These Ford sedans are basically big, comfortable, long-wearing Miatas, he explains. “It’s slow, it body rolls, but good God is it fun at the limit and fun to compete with,” he says of his personal ex-cop car. “It’s also the most reliable of the three cars that I own–120,000 miles on it, and I got it with 85,000. A lot of those miles were track miles, and I haven’t had to touch anything on the engine at all. It just keeps chugging along like it’s nobody’s business.”

The series welcomes the 1992-2011 Ford Crown Victoria, Mercury Grand Marquis and Lincoln Town Car. Power must come from the two-valve, 4.6-liter  V8 engine, and a $4000 claim rule is in place to limit creativity.

Brett recommends running the 2005-and-up cars, as they received an improved unequal-length,  double-wishbone front suspension–also known as short long arms, or SLA for short. He went with a 2006 Crown Vic. 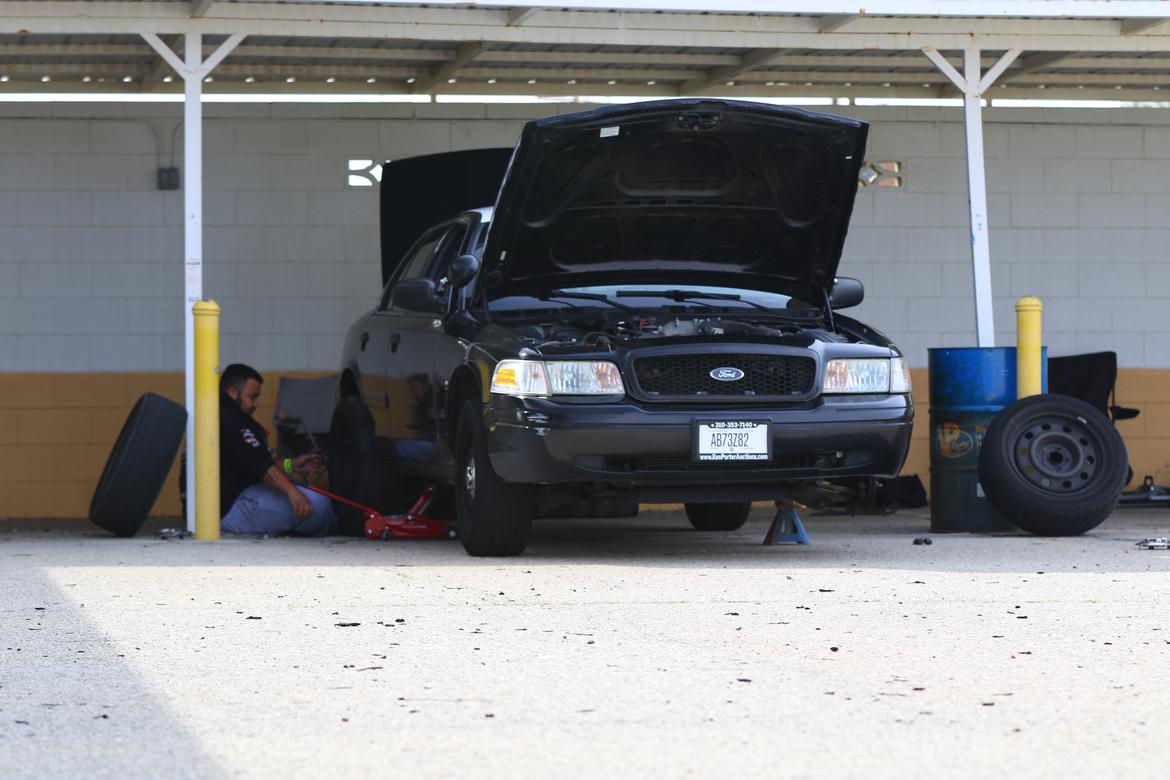 “We were absolutely surprised when we took the car to get aligned,” he reports. “We were able to get 3.1 degrees of negative camber out of it. That level of camber made the front end even more controllable.”

In addition to the later chassis, Brett recommends a P71-spec police car fitted with the 3.55:1 final drive and limited-slip differential.

He figures $1500 to $2000 can buy a good example of a black-and-white police cruiser–he recently helped someone score the perfect car for $1625 out the door via GovDeals–but budget $3000 or more for an unmarked car. “Everyone is welcome to buy the undercovers, but it kind of defeats the purpose of having a cheap track car that you can push to the limits without worry,” he says. 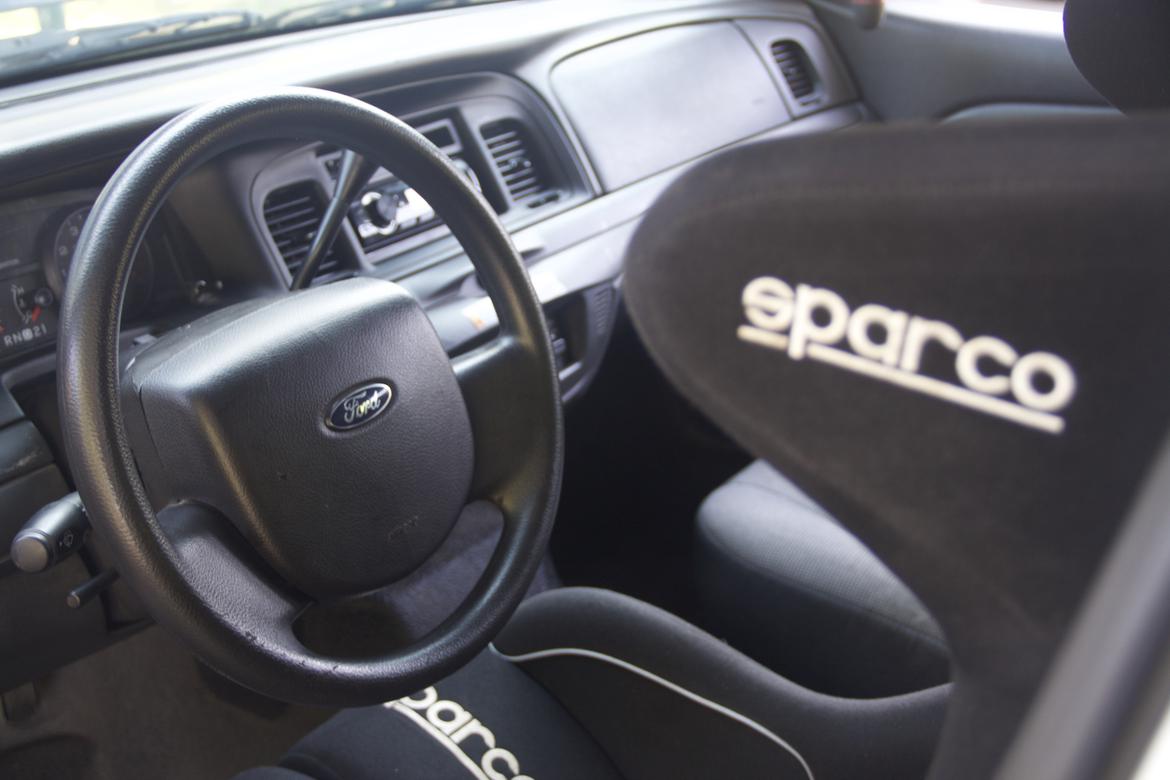 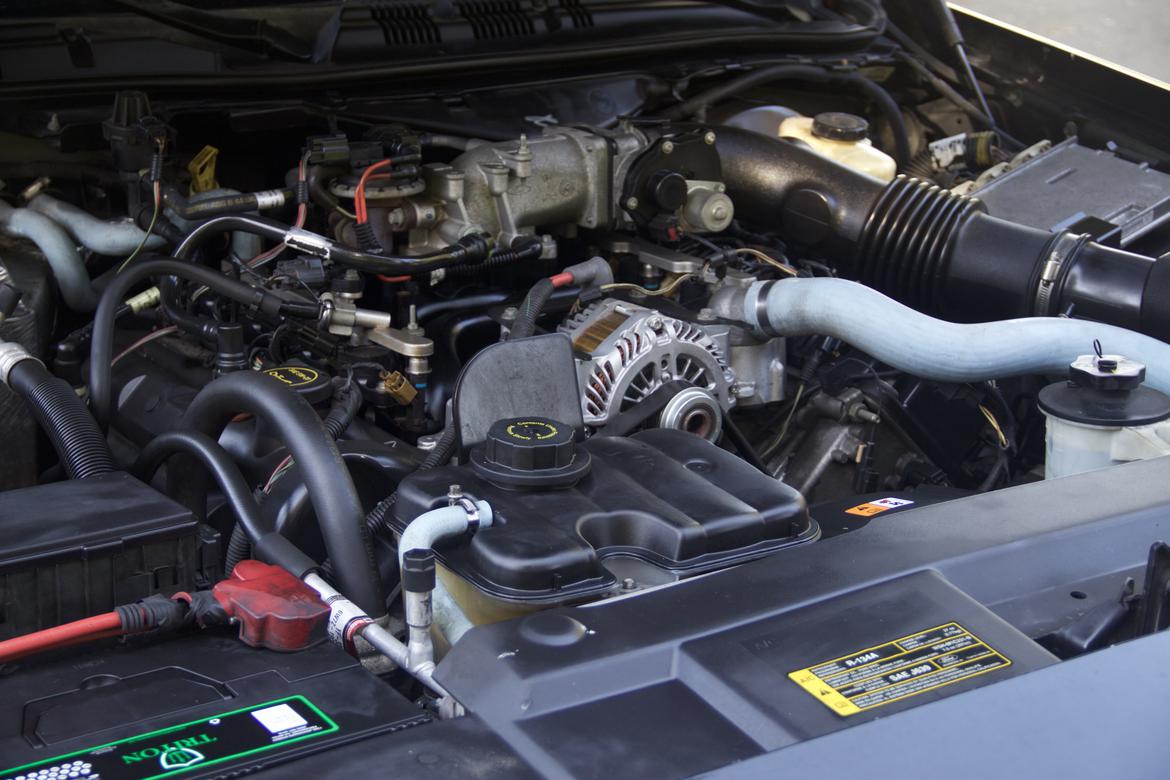 The rules allow for a few upgrades–easy stuff llike hood vents, deep-sump transmission pans and upgraded rear control arms–but entries must run stock wheels from the later cars. A proper bucket seat is a worthy upgrade, and Brett notes that Planted Technology brackets can mate a standard side- or bottom-mount race seat to the Ford chassis.

“Even for an outrageously tall person like me, there’s still plenty of room,” he continues. “On top of this, their brackets come welded with a tab for the stock seat belt receiver if you don’t end up wanting to put a roll bar and harness in right away. Currently with the time attack stuff, we’re all just running the stock three-point seat belts.”

The series requires a tire treadwear rating of at least 260, the stock spec. “If driven hard, they’ll last maybe one or two events before you’ll need to replace them,” Brett says of the stock-type tires. “They like to delaminate very quickly in my tests.

Brett runs the Firestone Firehawk Indy 500–plenty of grip and life, he says. It’s a 340tw model that retails for about $630 per set in the mandated 235/55R17 size. “They definitely scream at you when you ask too much of them,” he notes. “The tire adds to the whole idea of the learner series, basically giving you a forgiving tire that can also teach you the boundaries of what it can do at a low risk.”Brakes have proved long-lasting as well. And when it’s time to replace them? Brett reports that all-new hardware cost him less than $200 complete through his local Ford dealership. 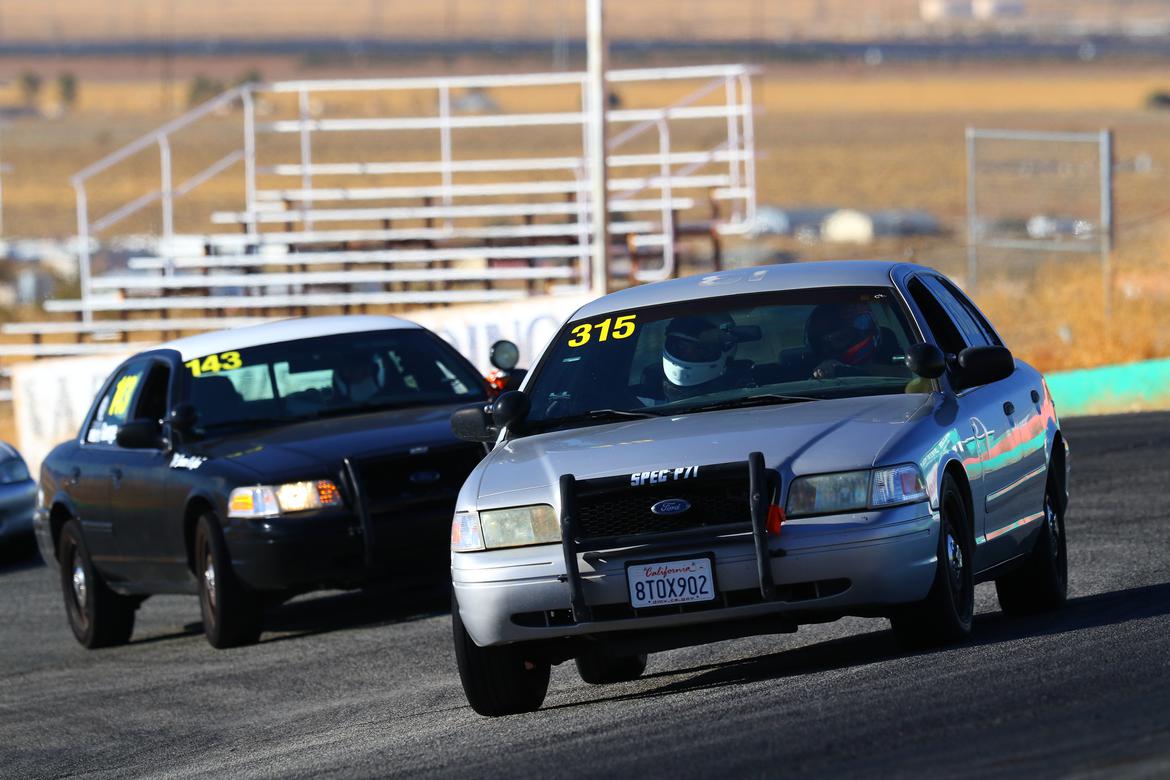 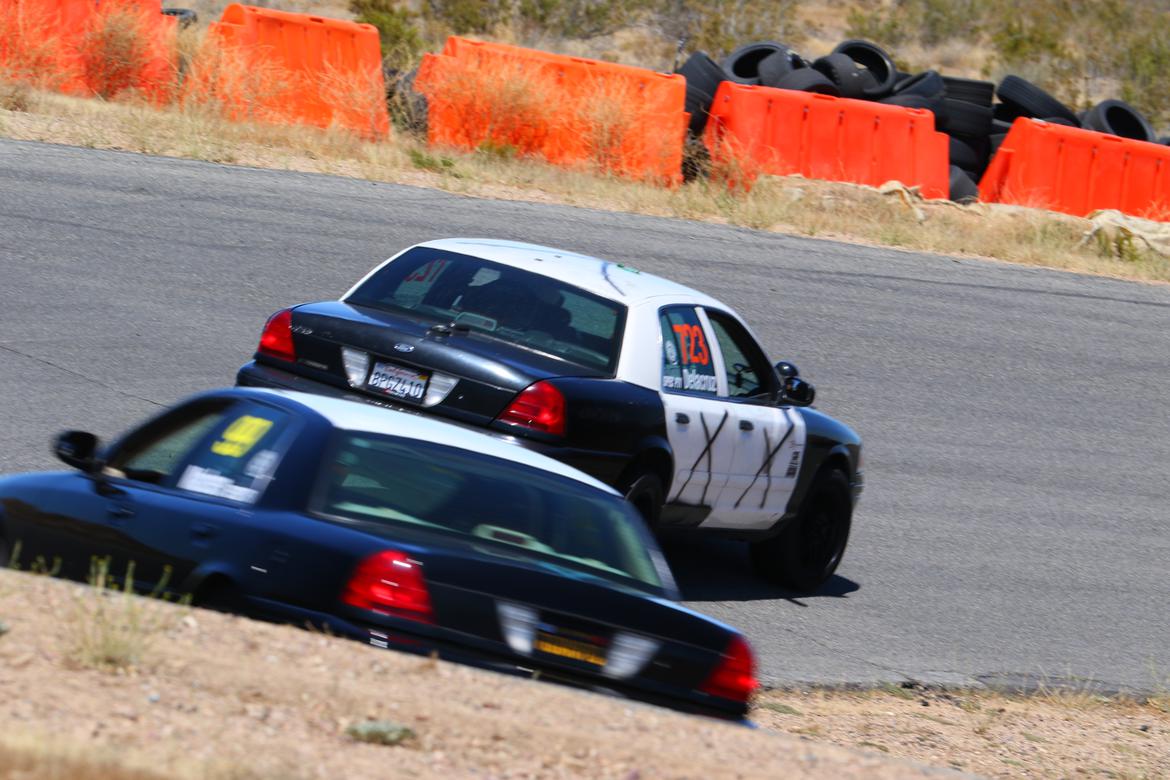 “These cars are truly fantastic to drive at the limit,” he says. “SLA front suspension with a four-link/Watts rear suspension makes this thing super comfortable at the limit of tire adhesion, and if you go over, it’s so easy to bring it back under control.

“You could honestly bring out your bone-stock Crown Victoria and race with us.” Just add personal safety gear and a seat, Brett figures, and you’re ready to hit the track.

View comments on the GRM forums

I’ve had three panthers, the last a 95 P71. I’d love to see this here in Florida. I’d have to give serious consideration to participating.

The article says that it is a southern California series, but they are running them in the Midwest.

Someone needs to set to set one of those up as Ex-Police from SNL.

Such a great way to enjoy an inexpensive car!

In the midwest, there is Spec Panther

GRM connection:  You might recognize the current class leader, Rick Hoback as the guy behind the wheel of the Joe Burchett, Challenge Subaru MicoVan.

Yes, that’s a pink doughnut with sprinkles on car #66

That’s awesome! But I feel like the supply of these is going to start drying up soon, police haven’t used them for years and they’re aging out of any remaining fleets fast.

Jake and Elwood approve this message.

That’s awesome! But I feel like the supply of these is going to start drying up soon, police haven’t used them for years and they’re aging out of any remaining fleets fast.

The demo derby guys are all about them too. Won’t be many shells left in good shape before long. They look fantastic with those Mustang wheels in the trailer shot.

I’ve got a good argument against them: the transmission is awful. You need to put a giant cooler on the car to ensure you can do more than a single lap. Also, flooring it 2 seconds before you get to the apex in anticipation of the kickdown is unnatural.

I’m a big fan of running what you brung, and they’re fun to haul around a track, but if you thought stock Miatas were slow…

It’s no spec 2nd gen Prius, but I understand how it would appeal to some people.

So is a Panther or a Fit faster around the track?

Around here anything that runs is too pricey to be a toy. Damn this used car inflation.

I love it.  The roundy-round tracks here in Florida have adopted a similar class and its growing FAST.  20-25 car fields are common.

In reply to frenchyd :

Would they have to be harnessed and cuffed? If so I may know some people.

In reply to frenchyd :

Would they have to be harnessed and cuffed? If so I may know some people.

You might then want the Mercury Marquis de Sade version.

Most places would require a cage for W2W, which would add another ~$3k to the cost.  Still could be a ton of fun as a spec series mind you.

In reply to RJStanford :

I’d be happier to do that. Push bar bump drafting anyone?

are there any driving schools that use old cop cars ?

As someone who has actually done a full track day in a 2008 Crown Vic, I would have to say that the LeMullets thing is the only way to do it, unless you’ve never driven on a track.  These things are not fast, but if you can pit people and just try to avoid getting it yourself, joy may be had.  Otherwise, slow go karts are more fun.

I’ve got a good argument against them: the transmission is awful. You need to put a giant cooler on the car to ensure you can do more than a single lap. Also, flooring it 2 seconds before you get to the apex in anticipation of the kickdown is unnatural.

I’m a big fan of running what you brung, and they’re fun to haul around a track, but if you thought stock Miatas were slow…

For what it’s worth the P71’s come with an enlarged cooler. Never had an issue with cooling the trans in stock form but we also column shift them in Spec P71. Letting the trans think for itself is not ideal. Add the allowed tune and valve body as well as the deep pan and the cars are even more flawless.

Haven’t driven one of the Ford police spec cars, but I had an Impala SS which was similar to the Chev police car.  Wasn’t fast by today’s standards, but it handled and stopped better than a big barge had any right to, and it made a righteous roar (straight though mufflers) when you stomped it.  Would have been great fun on a track.

In reply to Gearheadotaku (Forum Supporter) :

Unless someone has really,  really taken care of it, any 9C1 is completely roached at this point.

I miss my old squad car.

In reply to Gearheadotaku (Forum Supporter) :

How about a 2012 9c1? This series also has a Super Interceptor class for non-spec legal cop cars. 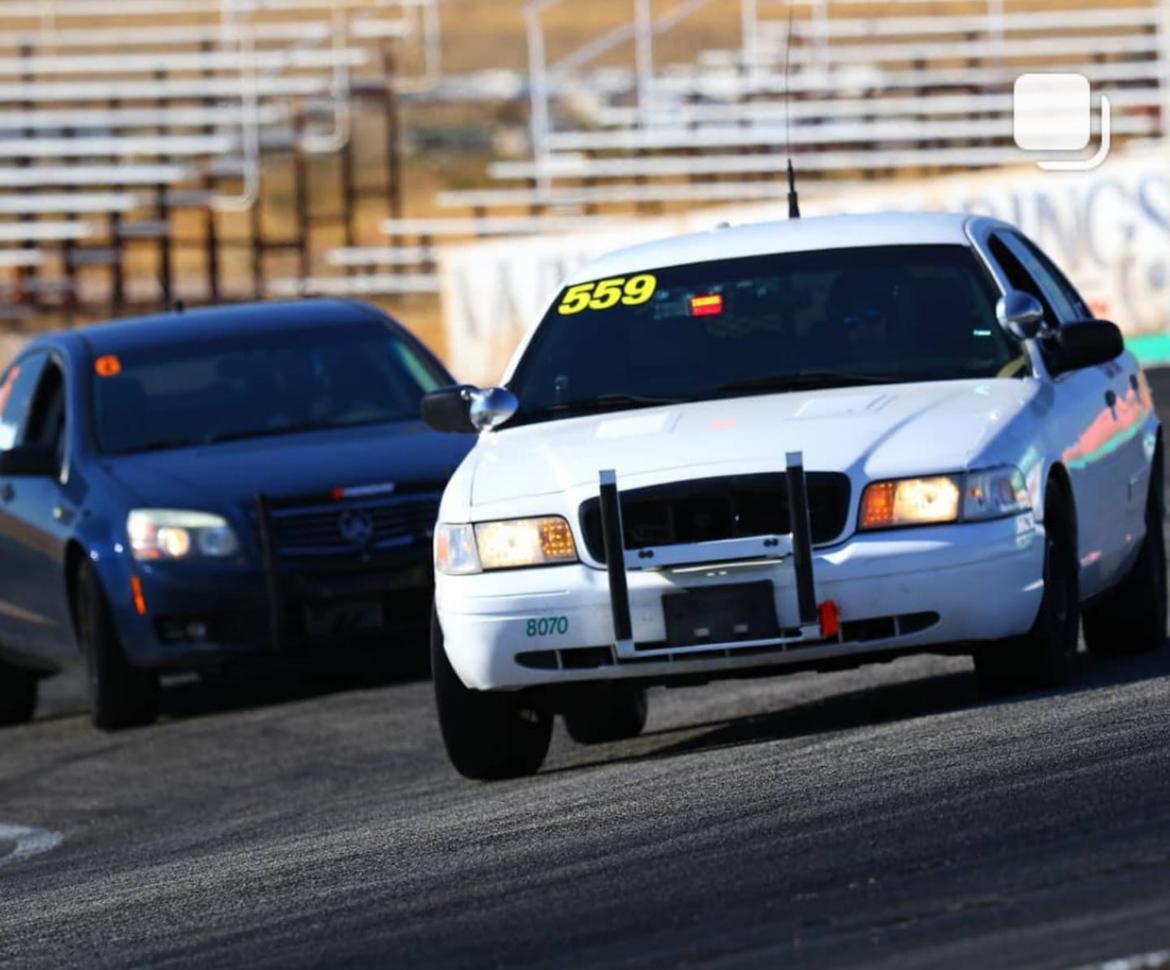 I think this is really cool. Maybe cooler than it actually is!

I have a good friend who is a cop and he told me all the cops miss the Crown Vics. He told me they hate the Chargers even though they are faster. I almost never see the Caprice/G8. Wonder why.

It’s my understanding that the people in handcuffs in the back of a cop car are rarely volunteers.

It’s my understanding that the people in handcuffs in the back of a cop car are rarely volunteers.

“You know, the cleanest and nicest police car I have ever been in in my life. This thing’s nicer than my apartment. “

After one particularly difficult weekend dealing with everything racecar, my racing partner and I outlined a Time Trial series we liked to call “Spec Silver”.  It’s all non-police versions of Grand Marquis and Crown Vics (and possibly other vehicles commonly chosen by individuals who may be over a certain age) where the vehicle must remain bone stock down to the all season tires and all power accessories must work including power seats, power windows, radio and A/C.  You’re DQ’d if any of that is found to be inoperable in tech after a run session.  The premise is to get a group of people to show up with similar cars with an absolute minimum of preparation outside of normal maintenance and drive a slow car fast on the track for bragging rights.  We wanted to reward people who also drove their car to the track and who ran older versions of the cars with the pushrod V8, but we never completely worked out the handicapping system for that or for other vehicles beyond the Panther chassis.

I would totally be in for the Metro-State racing team.

Can my car race with you guys? Lol Now you know why I put a Mustang body on one! 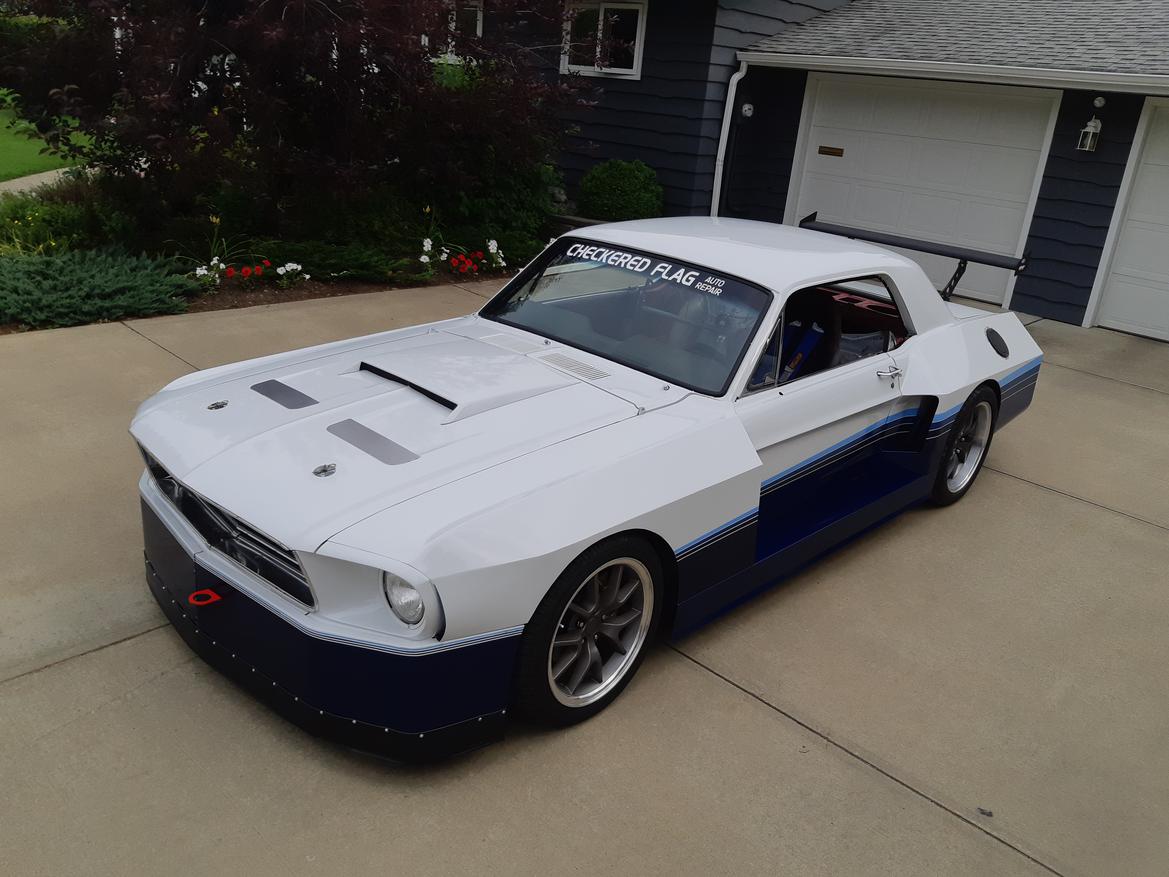