Will we see a new Indian tourer soon? Documents show the Challenger-based Pursuit model is waiting in the wings. (Indian Motorcycle/)

Indian Motorcycle has thus far had a fairly quiet new model release cycle for calendar year 2022. We saw its heaviest hitters unveiled much earlier, with the completely redesigned three-bike Chief platform (which are 2022 model year bikes) debuting way back in February of 2021 and the revised FTR series coming soon thereafter. This year it’s been just the new Scout-based Rogue grabbing headlines, but now comes word that Indian has something far, far bigger—literally—waiting in the wings, according to our sister site Cycle World. The gist is that we may soon see a full-dress touring model based on the Challenger platform, and it’s likely to be called the Pursuit. 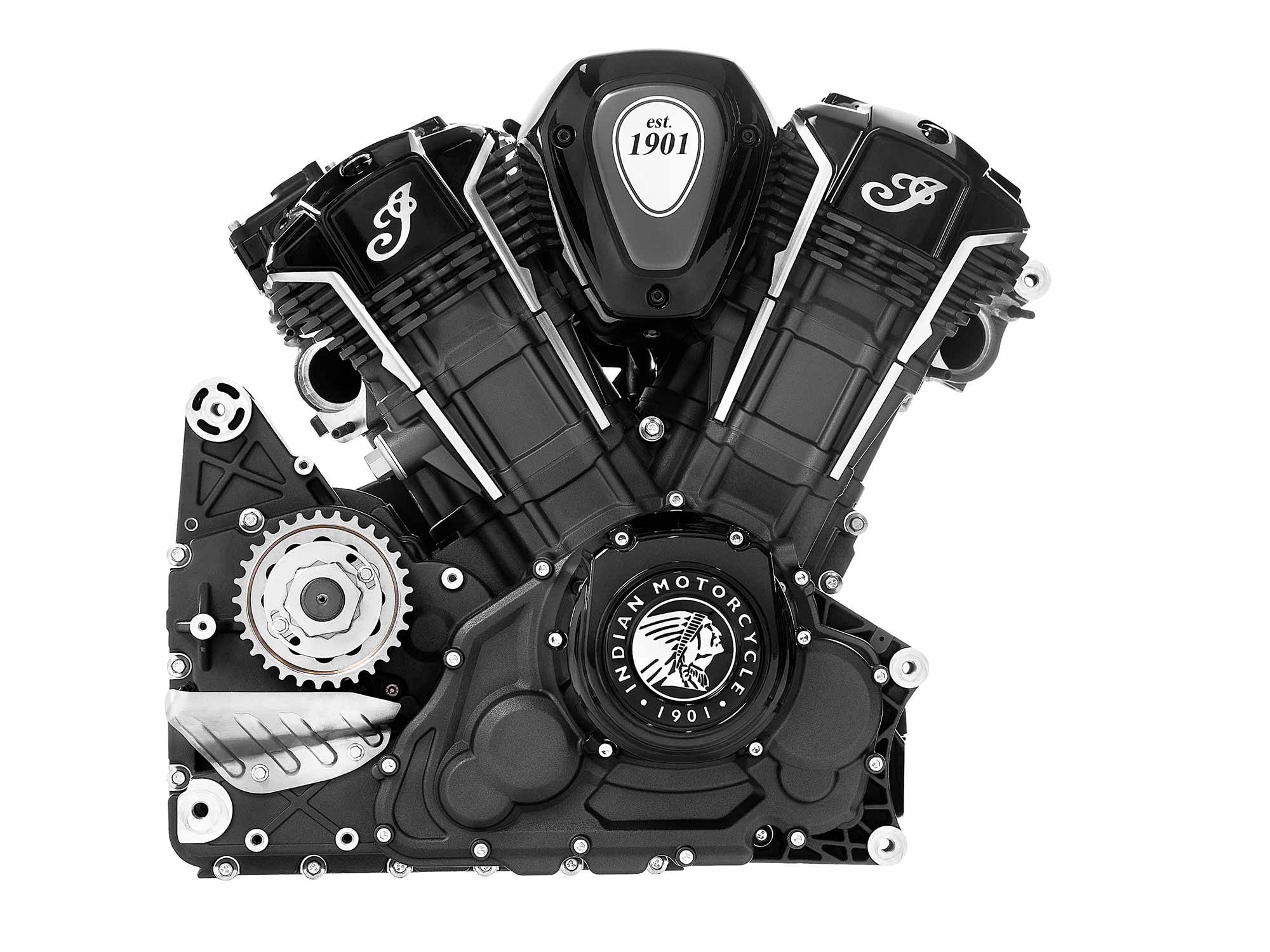 Of course that makes complete sense, as the Challenger was designed from the jump to be a base for several models. There’s no question the time is nigh for a distinct new iteration based on the liquid-cooled V-twin, rather than just another trim level; Indian trademarked the name “Pursuit” almost two years ago. Initially, we assumed it might be a traditionally styled model, and others guessed a sportier machine, but the details Cycle World’s just uncovered show quite the opposite; in fact, we may be looking at Indian’s biggest bike yet. 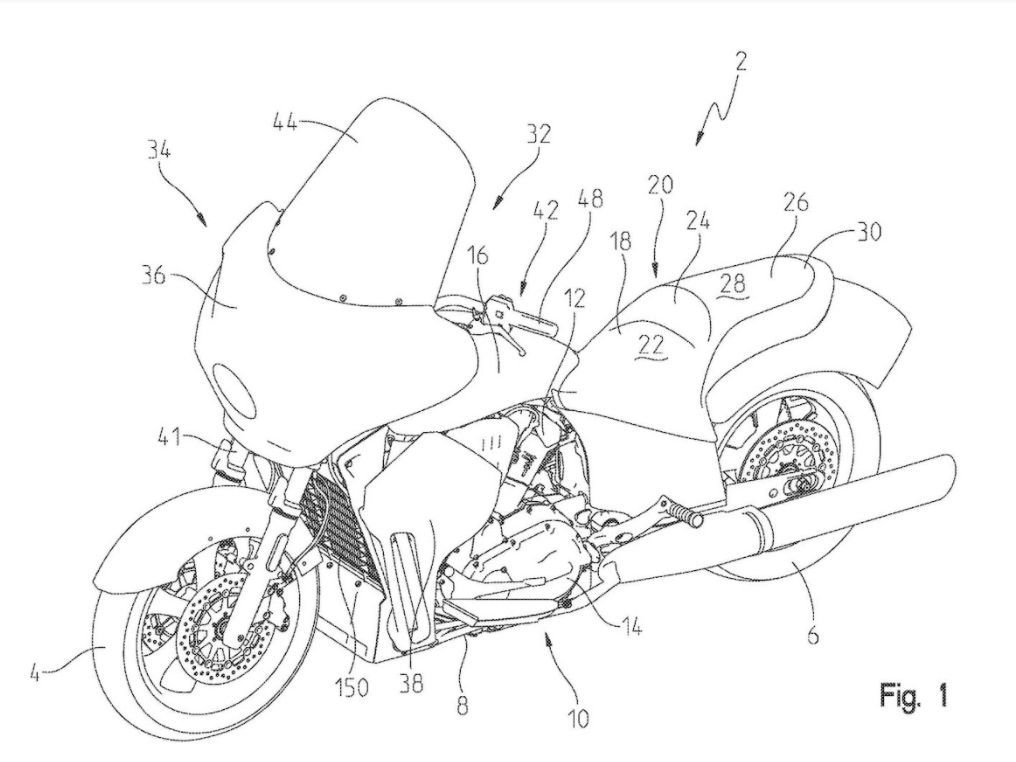 An earlier patent showed a traditionally styled machine with a liquid-cooled engine but with a batwing-style fairing and no trunk. (Indian Motorcycle/)

While there are no photos of the new model just yet, we did get some more numbers to help fill in the blanks. For instance, the new specs confirm that the Pursuit will use the same 1,768cc V-twin as the Challenger (good for 103.1 hp at 5,560 rpm on our dyno), and it’ll have the same tuning and exhaust as well. The new bike will also share the Challenger’s chassis, with the Pursuit’s 65.7-inch wheelbase, wheels, and tires all being the same (with tire sizes being 130/60-19 at the front and 180/60-16 out back). 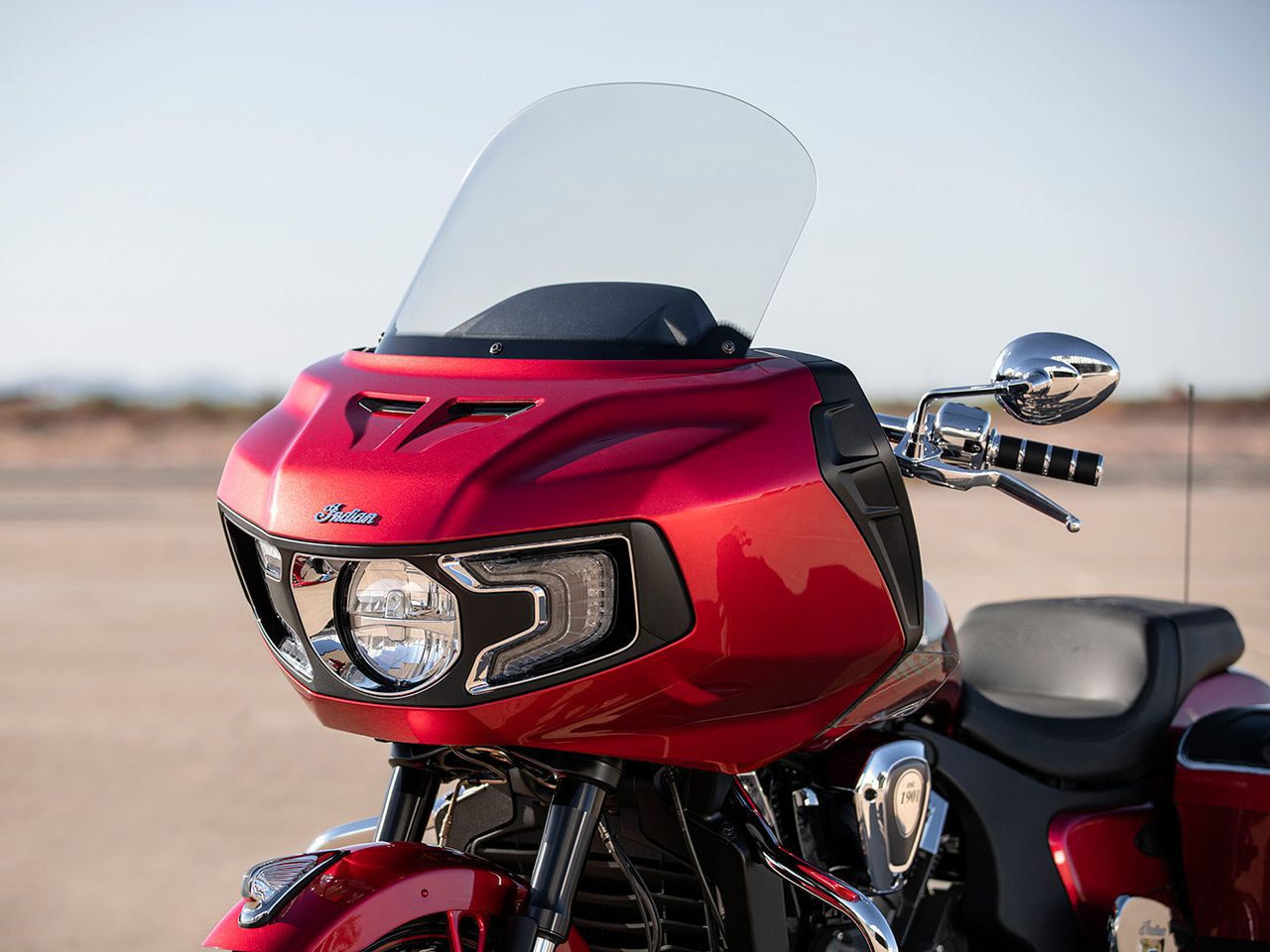 In addition to the engine and chassis, the fairing from the Challenger may also make its way onto the new bike. (Indian Motorcycle/)

The differences will be in the details, namely the added bodywork, components, and some amenities tacked on in the name of touring comfort. It actually looks like the Pursuit will even carry the same Road Glide-type nose/fairing design as the Challenger, even though earlier patents showed a batwing-looking unit fitted onto a Challenger chassis. That aspect is bolstered by specifications showing the Pursuit’s electrically adjustable screen has the same range of movement as the Challenger’s, though the new bike’s screen actually sits higher. The spec sheet also shows that, in nearly every dimension, the Pursuit is bigger than the bike it’s based on, which can only mean it’ll be a full-dress tourer. Overall, the Pursuit measures 102.7 inches long, compared to the Challenger’s 98.5-inch length, and since both bikes have the same wheelbase, the extra 4.2 inches is likely due to an added top case, which may or may not incorporate a passenger backrest. Specs show the Pursuit to be taller and longer, which suggests a top trunk/backrest added out back, as on the <a href=”https://www.motorcyclecruiser.com/indian-motorcycles/” target=”_blank”>Roadmaster</a> models (Dark Horse shown). (Indian Motorcycle/)

Then there’s the matter of weight; in ready to ride form, filled with fuel, the Pursuit tips the scales at 917 pounds, which surpasses the brand’s 908-pound Roadmaster dresser.

It’s also fairly clear that Indian will introduce two nearly identical versions of the bike, the Pursuit Dark Horse and the Pursuit Limited, in the manner of Indian’s established trim levels. That means the Dark Horse will possibly have fewer bells and whistles but get the black-out treatment, for a darker and more minimal look, while the Limited might pack on a couple more convenience features, with chrome and color to give it a more premium feel. That said, in the specs that Cycle World reviewed, both the Dark Horse and Limited versions of the Pursuit had the same weight measures, so they may be closer in their feature sets than not. 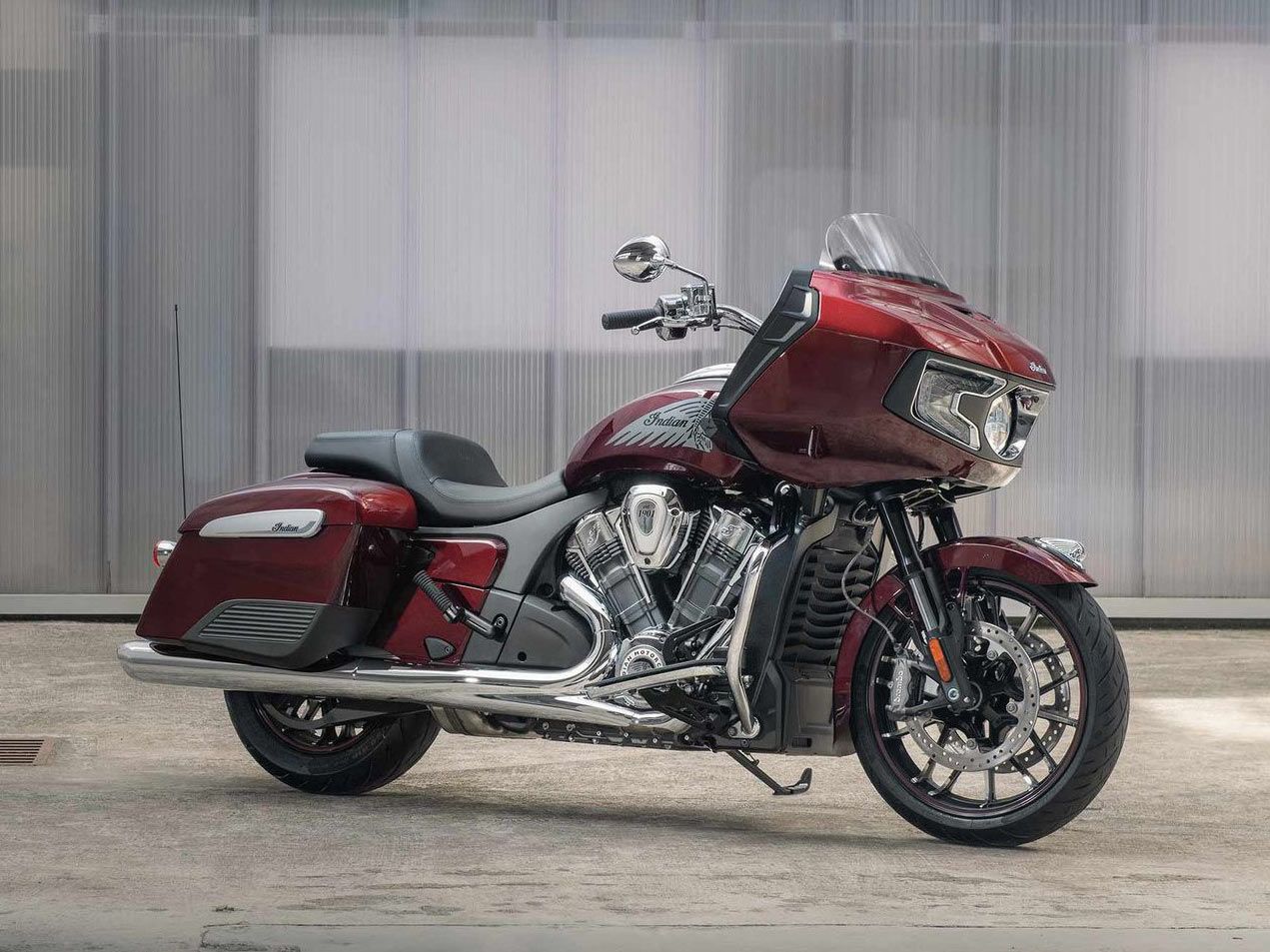 Previously, the top-of-the-line Challenger was the Limited trim (shown), but Indian may also have a higher-level Elite version on the way. (Indian Motorcycle/)

In addition to the new Pursuit, apparently Indian also confirmed its intent to add a new Challenger Elite model, which would put it at the top of that bagger series, ahead of the Limited model. Since it looks to have the same dimensions and weight, the new trim would likely be highlighted by high-end detailing like hand-finished paint and other premium touches.