Cobra Daytona coupe? No, too small. The nose and grille are a bit tall for a Marcos, though the rear haunches bear a resemblance. The snout exhibits Jaguar traits, but with a Bugatti- or Morgan-esque mouth. Circling to the rear, potential Ferrari styling cues appear.

So what is it? It’s the Cardinal Coupe, a new, purpose-built track day car out of Ohio.

The Cardinal’s exterior styling is heavily inspired by Alfa Romeo’s Giulia TZ2, but it’s powered by Ford. The car combines the nostalgic, streamlined shape of 1960s GT icons with modern downforce and cooling aerodynamics. The design was done with the aid of CFD, and results were correlated to real-world testing.

As a result, the base-level car produces noticeable downforce and stability at high speeds as opposed to the innate lift found in most street car bodies. An additional aero package option for the Cardinal is under development.

In a YouTube video shared by its builder, Fields Auto Works, pro driver Tom O’Gorman compares the driving experience to that of a Formula Ford. “It has a vintage, ’80s, raw, fun feel to it,” he says. “The power is pretty wild. The 2.3-liter is persistent. It’s pretty perfect.” 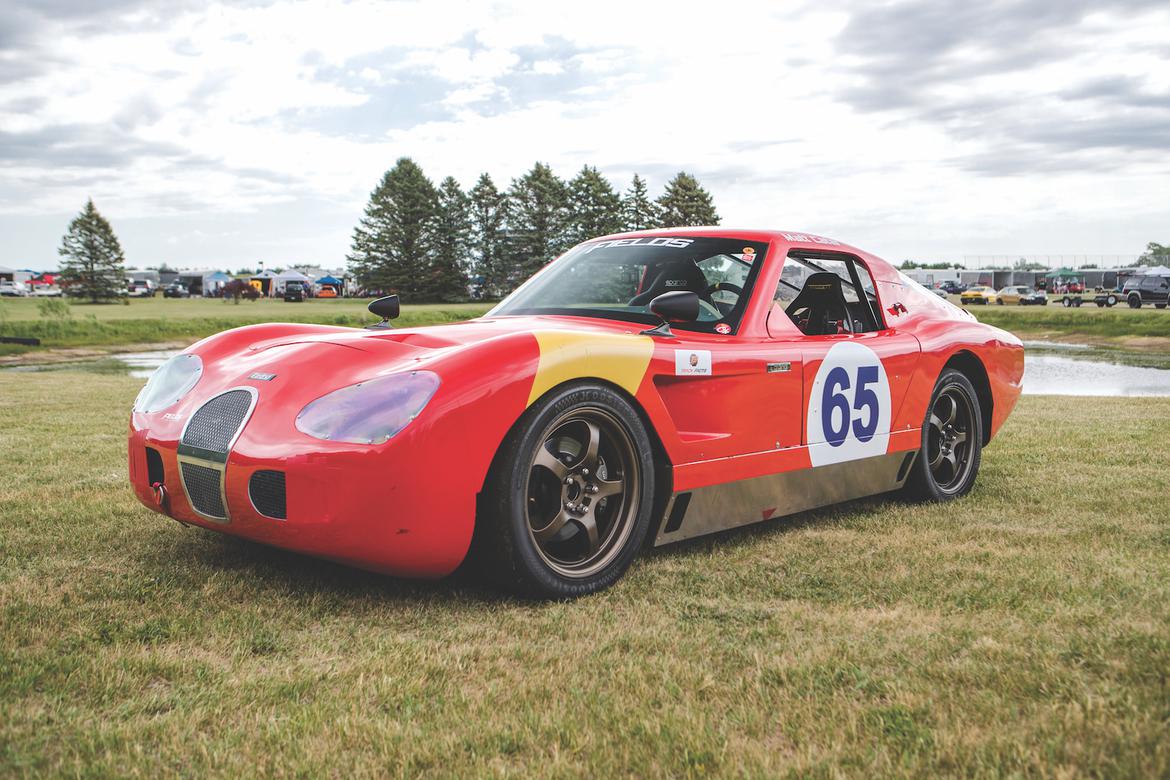 Engineering a street-legal, reliable track day car from scratch took combined expertise. The goal, its creators say, was to make it quick, affordable and easy to repair. The base wheel-and-tire package, for example, uses 245/45R17 rubber on 17×8-inch alloys, reining in costs without compromising performance. 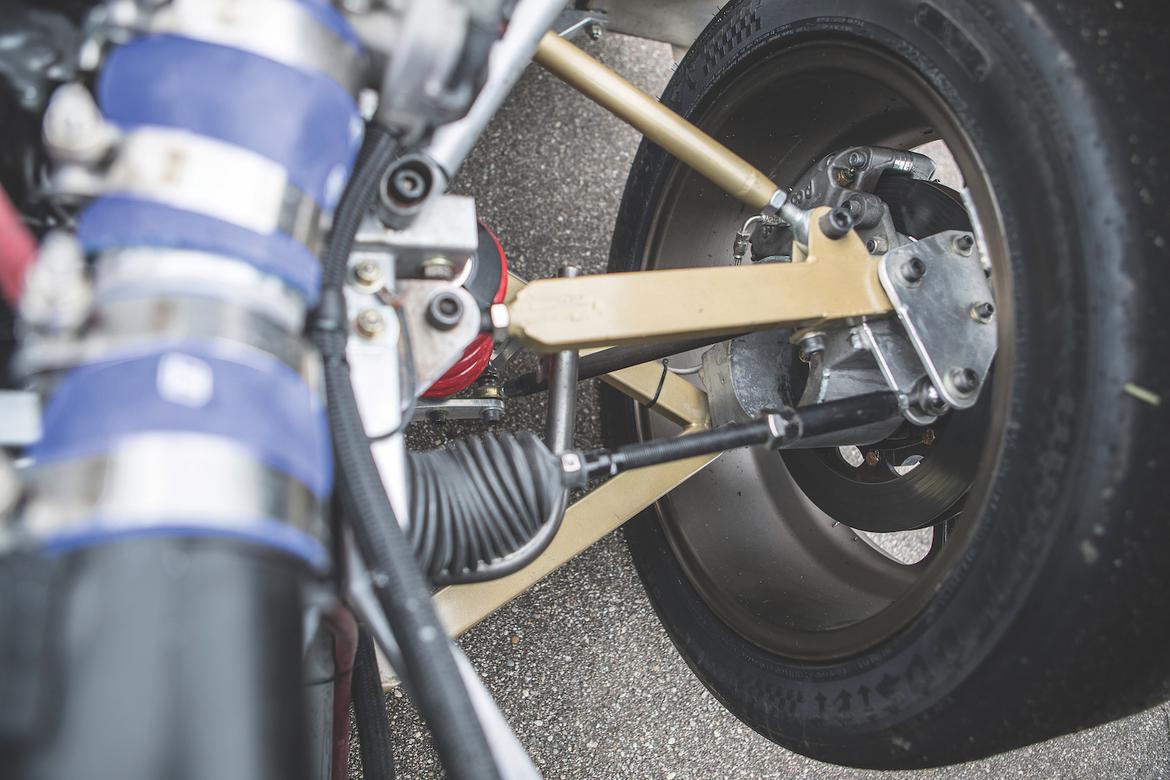 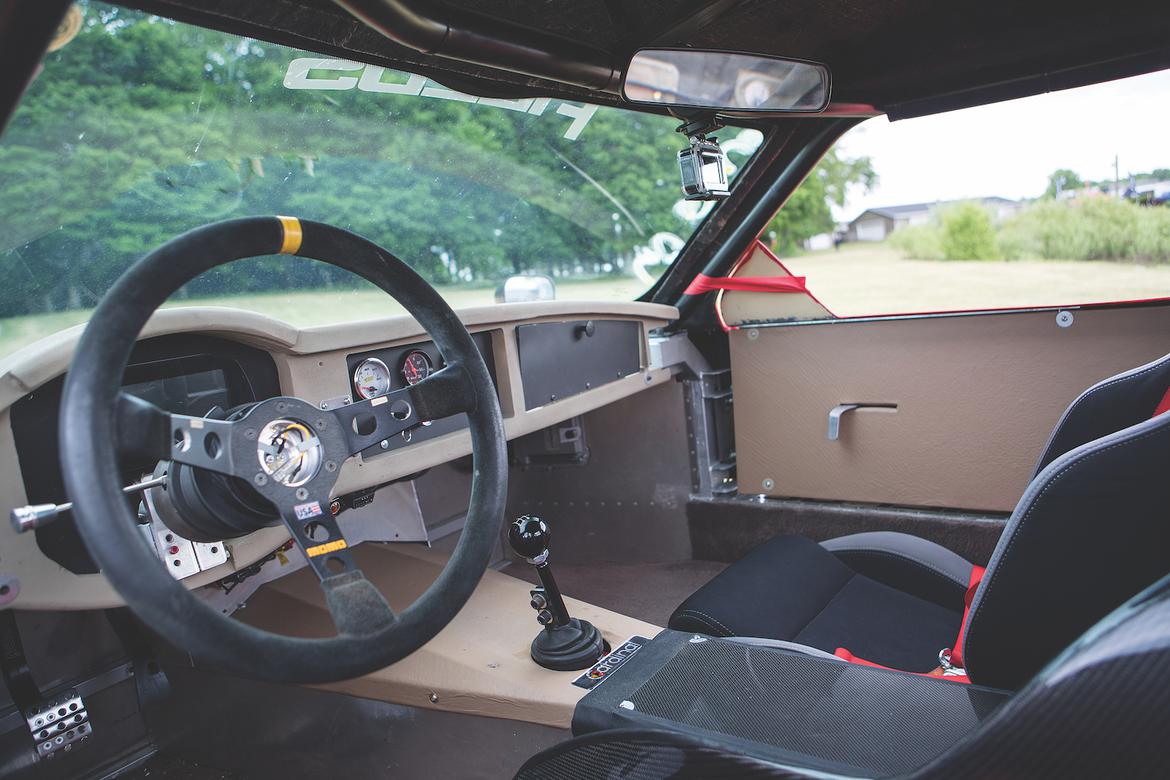 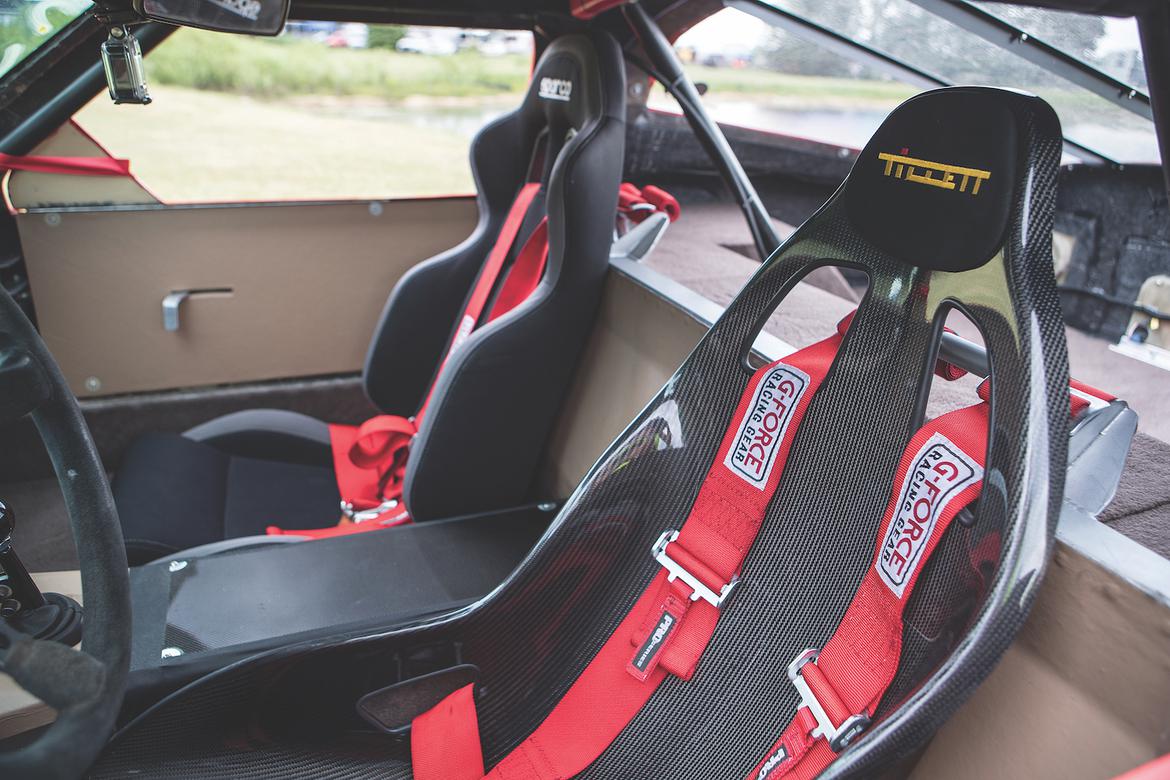 One of the hardest challenge to overcome? “Starting a new sports car company is really difficult,” explains Fields. “Turns out, so is developing a new design from scratch!”

Assembling the car to satisfy their stringent strength requirements took a lot of research, trial and error. “It’s easier to fabricate our own custom parts, but it was imperative to keep our customers’ costs down and parts availability high,” explains Steve Hoelscher, the firm’s business development director and a six-time SCCA Solo national champ. “We’re happy with the mix of affordability and availability we’ve achieved, and the resultant performance per dollar is untouchable for something people can drive home from the track.”

A car’s power-to-weight ratio is key to winning races. Less mass means faster performance and decreased consumables. At less than 1800 pounds, the Cardinal weighs about 500 pounds less than a Spec Miata, yet its 2.3-liter Ford EcoBoost makes more than double the horsepower–some 300. 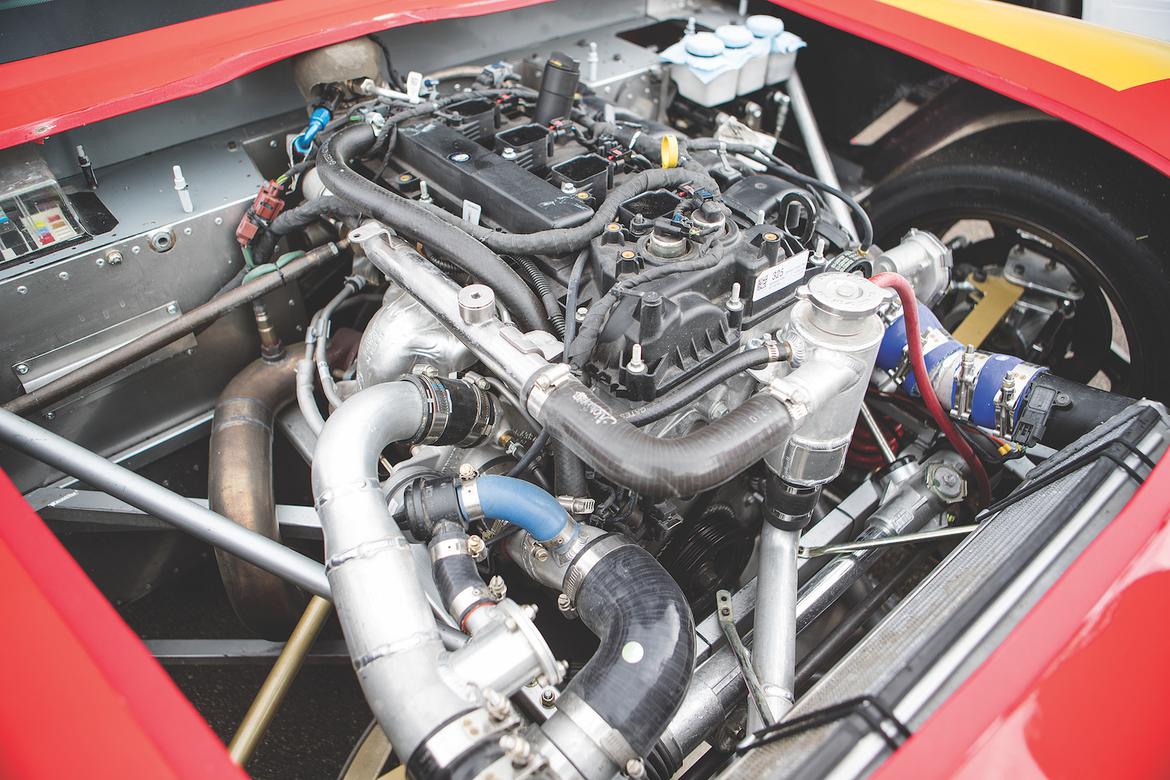 The Cardinal Coupe test car, which is representative of the base-level chassis using an unmodified crate drivetrain, more or less runs with the factory-built GT4 race cars. 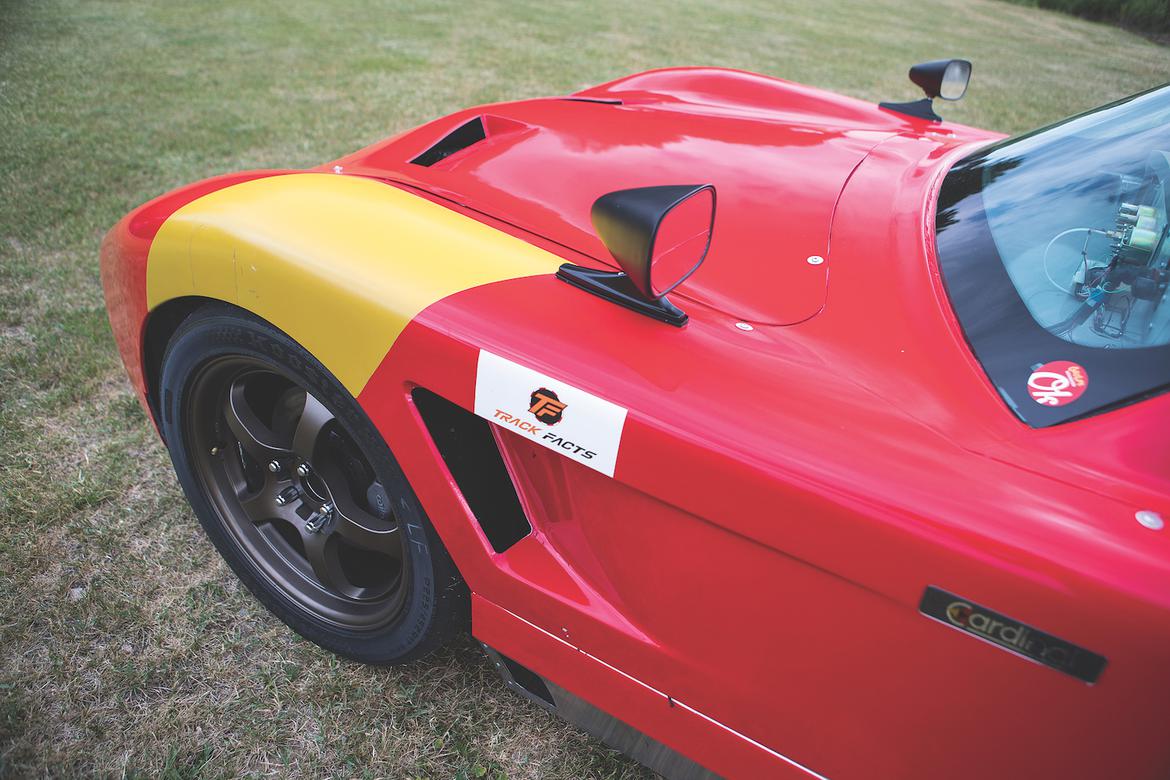 [The best track car you you’ve never heard of, according to Randy Pobst | Video]

But the Cardinal sets those lap times for less money. The car retails for $49,999 as a complete, rolling chassis–down to lights and paint–minus the drivetrain. “It appears as a totally complete car until you lift the hood or try to start it,” Hoelscher adds. “Figure about $65,000 for a track-ready car, with a new crate engine and transmission, through one of our Authorized Service Providers.”

View comments on the GRM forums

I talked to a couple of the guys at their both at PRI.  I think the basics are a great start.  From my perspective as an auto designer it needs some refinement of the design and surfacing to really be a home run.

I talked to a couple of the guys at their both at PRI.  I think the basics are a great start.  From my perspective as an auto designer it needs some refinement of the design and surfacing to really be a home run.

I’m pretty good with the whole thing except the grill. Kind of incongruous with the styling of the rest of the body.

Seen it on a video and was interested until I saw the body.  As fast as it is I still want to drive something that is good looking and sadly I don’t like it. It is shaped similar to a Cobra Daytona coupe but the Daytona coupe looks night and day better.

The surfaces are just kind of crude compared to something developed in a studio by professionals.  Granted – What we’re seeing so far is built on early tooling that doesn’t reflect the final production model so there is supposed to be some refinement for the cars that get into customer hands.  I’m not expecting a huge improvement but it should be somewhat better.

Yeah, the grill is… a curious choice.

Sounds like an awesome and relatively low-cost way to get your jollies.  The critical comments about the looks, etc. are really unfair IMO.  As one who grew up with the basic Devin body kits that looked cool but were tons of labor to become race cars, you knew there was no way that they could be reliable and street legal.  Hats off to the Fields folks!

I love how it looks, it clearly takes a lot of influence from 60s classic road racers and combines them well.

Except for the grill.  If they can do a different grill it’d be pretty much a perfect track car.  Just don’t like that grill style to begin with and it looks out of place since even back in the 60s it looked dated.  60s design cues and a 40s english grill, I guess?

Honestly, the grill is kind of cool – but is really clashes with the far more modern looking lights. Maybe if they had a similar chrome trim band around their edges or something?

I think it’s less the “old grill” and more that clash between old and new that makes it seem out of place.

Wonder what a properly set up Excocet or 818 would cost by comparison.  I’d rather go with one of those, but that’s just me.

I’m somewhere in the neighborhood of $20k into Project Princess Kart, the Exocet in the garage. Does it “need” anything? No, it’s a blast, as is. Could it use a full suspension refresh and some more finesse with the setup? Absolutely, and it would make it an autocross monster. It’s already surprisingly fast at regional events. Suspension sorting would put it very near the top, I suspect, on street tires. Throw some A7’s at it, and who knows.

Figure whatever said suspension costs, then your drivetrain of choice to suit power goals (stock is perfectly fine for autocross, but I suspect this thing will run out of steam by the time 100mph approaches), and there’s your math. Some back of the napkin accounting would put you in a rough ballpark of 35-40k to have a sorted 300hp Exocet.

Mine’s only 1600 lbs though… Race chassis with most of the stuff it needs to be street legal around here. My “tinkerer’s” goal is to see if I can get it below 1400 lbs with some very selective component choices. I have my work cut out for me.