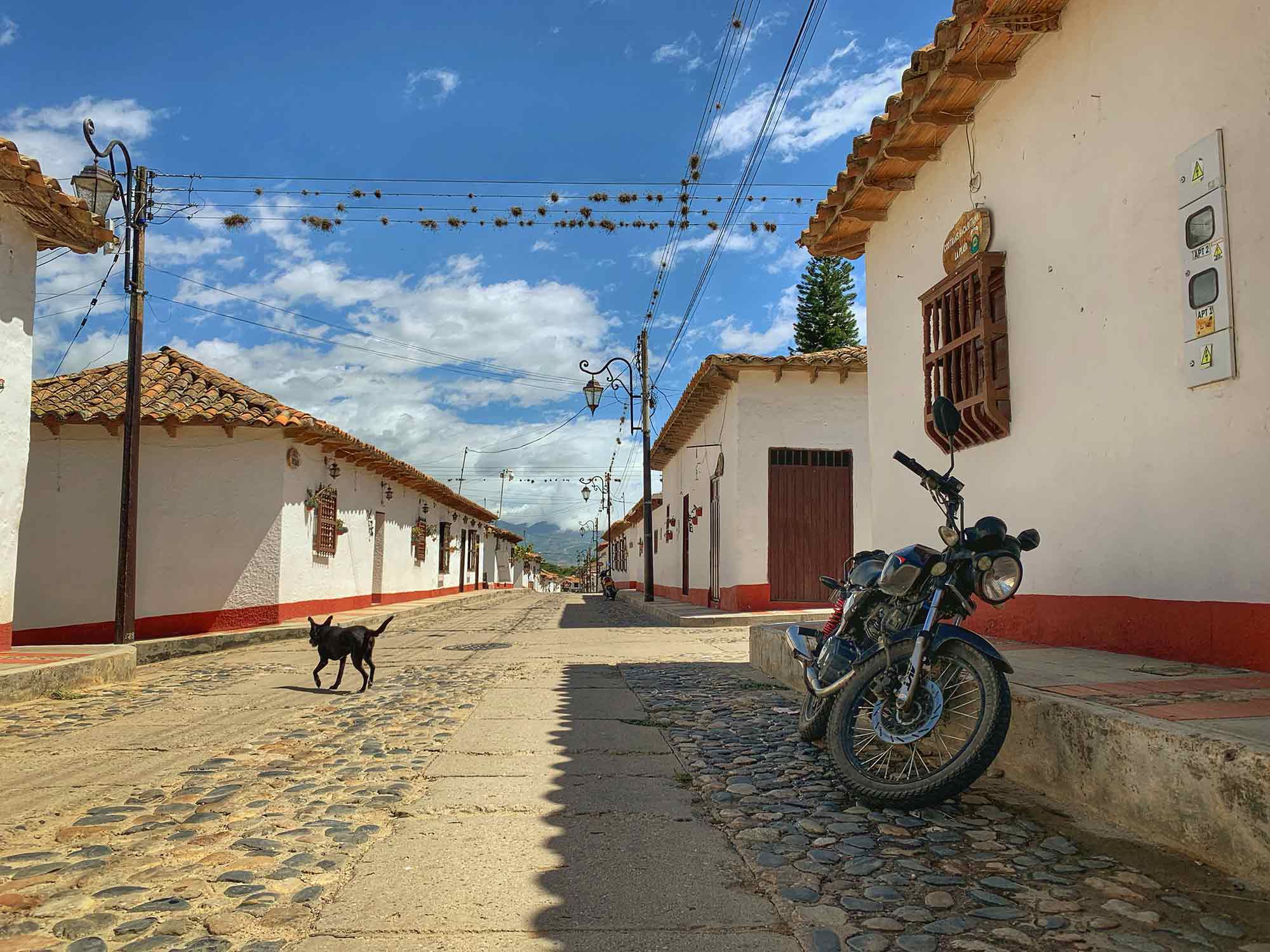 The quiet, lovely streets of Playa de Belen, Colombia, nestled within areas of strife near the Venezuelan border. (Janelle Kaz/)

As twilight fell in one of northern Colombia’s sleepy colonial towns, I turned the corner and was immediately surrounded by five military personnel, geared in combat boots and camo. One of the men yelled for me to turn around and put my hands up on the wall behind me. Doing so, the only woman among them approached me, using her boot to slide my feet apart so that she could give me a thorough, aggressive pat down. The air was cool. It had been a perfect sunset with vibrant, soft orange clouds against the darkening indigo sky.

It was only a few minutes earlier that I ordered an ice cream cone from a humble tienda. With my face pressed up against the warm stone wall, I was now gazing at the vanilla soft-serve in my right hand, glistening under the glow of a nearby streetlamp. I couldn’t help but silently laugh to myself while my heart pounded in my chest. “What will they do to me?” I wondered, watching the ice cream melt as gravity slowly pulled it over the edge of the cone.

Related: Motorcycle Misadventures: Will You Face These Adversities on the Road? 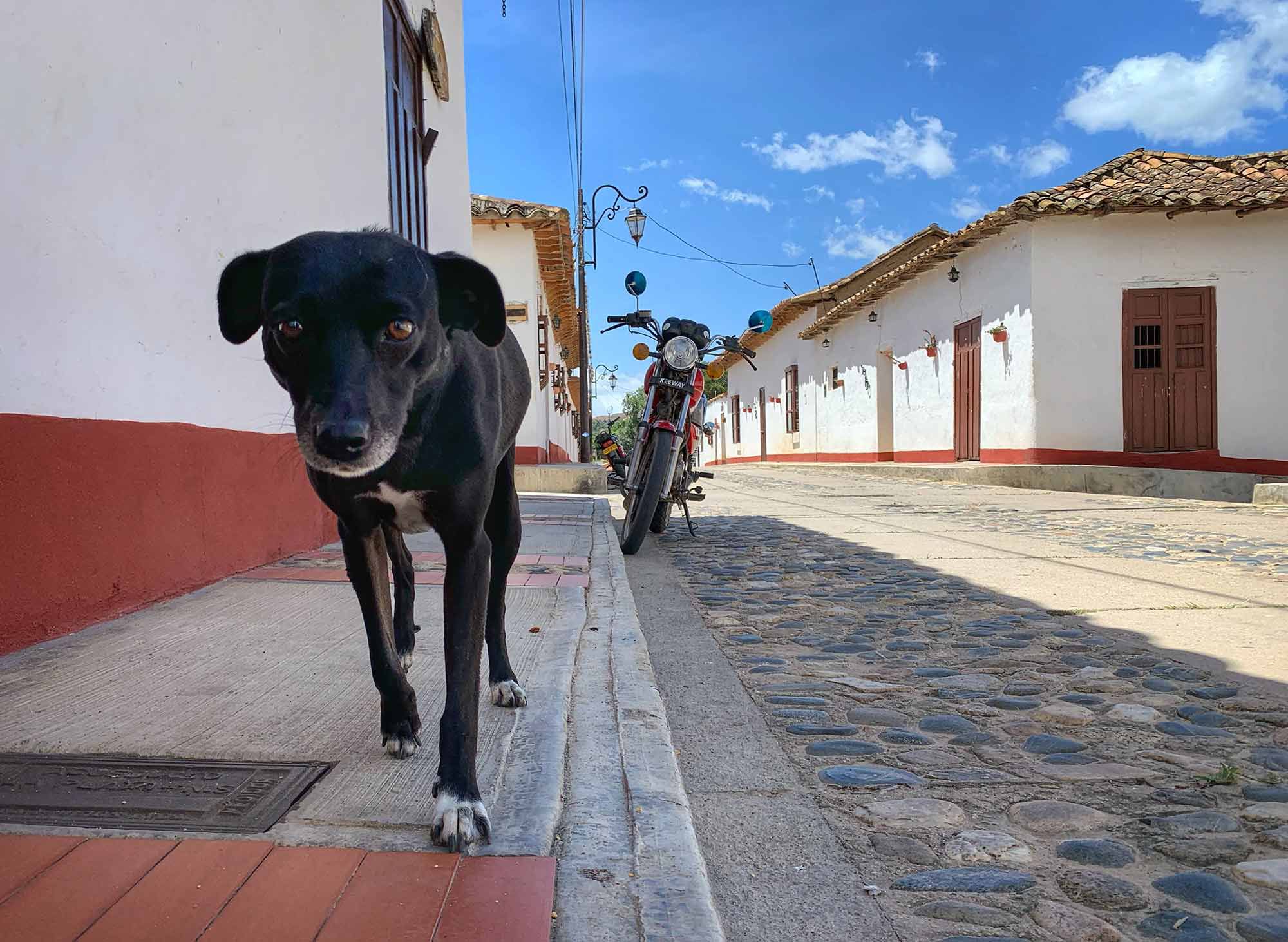 They call her “La Negra.” This dog followed me around all day, into cafes and restaurants, up the mountain to the viewpoint, and back to my guesthouse. She is loved by the whole town. (Janelle Kaz/) 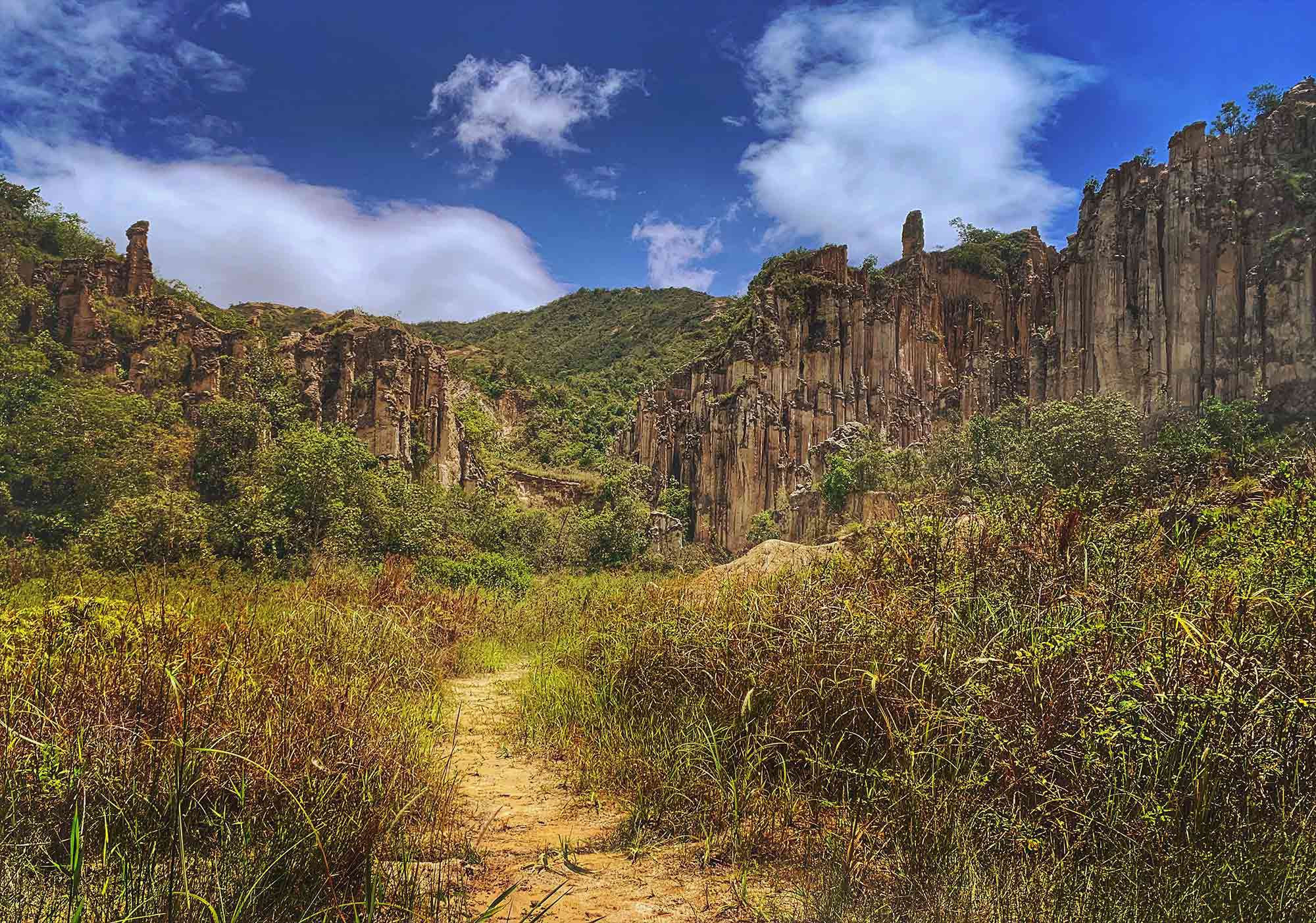 Related: The Problems of Motorcycle Travel No One Talks About 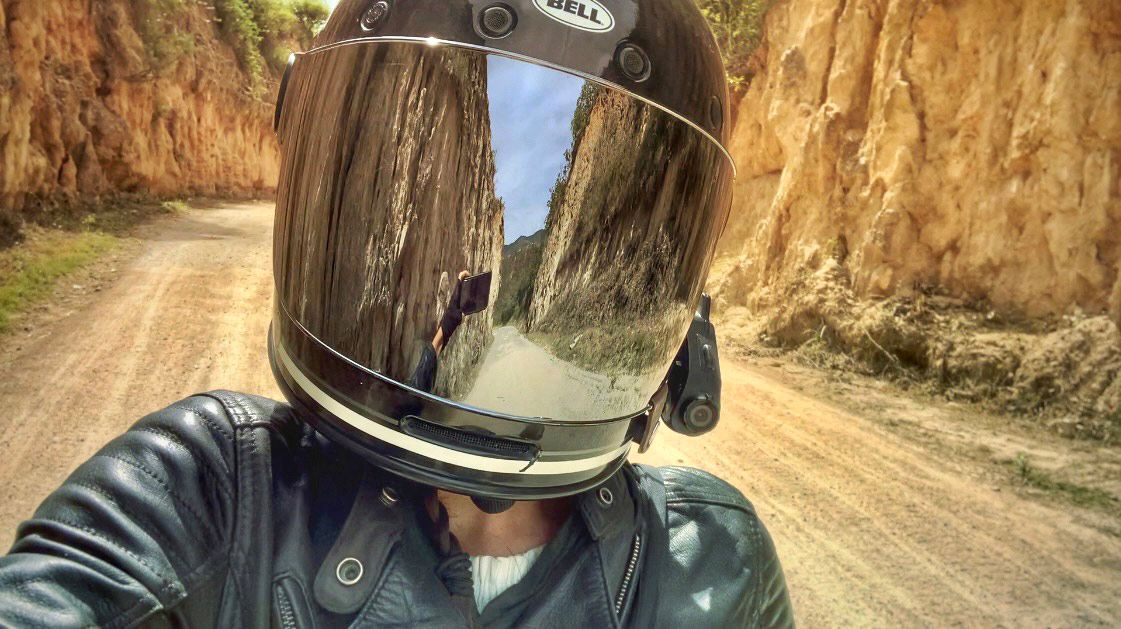 Sandstone walls form a gateway into the waterless beach of Bethlehem, the Playa de Belen, in Northeast Colombia. (Janelle Kaz/)

I had arrived in the National Heritage town of Playa de Belen just the evening before, ascending a curvy mountain road and careening through a narrow corridor of yellow rock walls. I was there to see Los Estoraques, the strange sandstone formations named after a medicinal tree that was overharvested to the point of local extinction within the last century. Wearing my well-worn leather jacket, the soldier’s hands stopped when she felt my spinal armor, asking me what it was with a suspicious tone. Her face was directly behind me, so I simply hollered that it was motorcycle protection. I slowly turned around with my hands still raised to show them that the armor was also in my elbows and shoulders. The man barking orders told me to take my hat off, and while squinting his eyes, leaned in closer to inspect my face and demanded to see my documents.

I did my best to eat some of my rapidly liquifying dessert before digging into my hip bag for my passport, studying their faces as I attempted a laugh and a casual apology, “que pena,” for having to deal with my not-so-frozen treat throughout the ordeal. 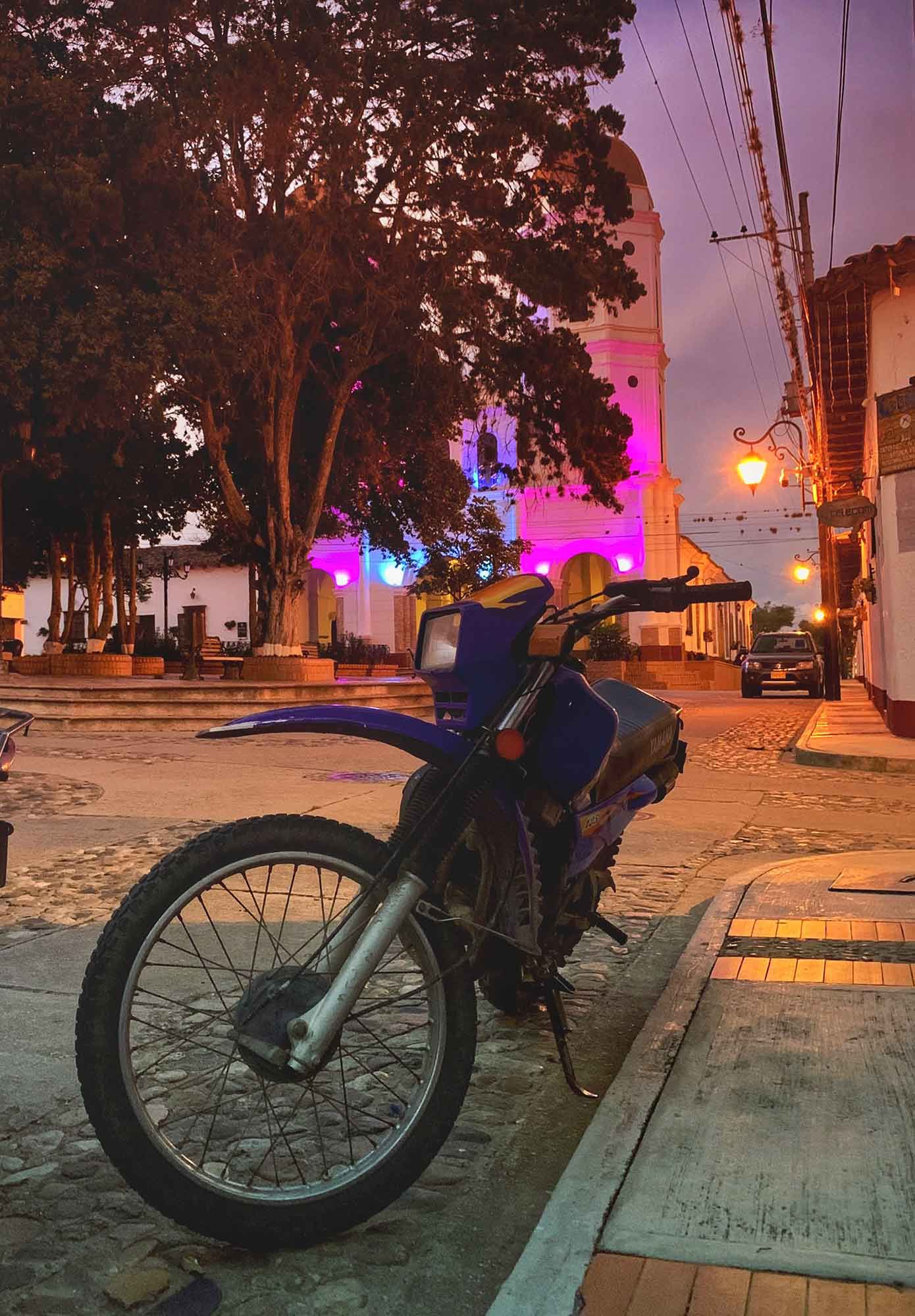 They had just flipped the fluorescent lights on the church, sending sparks down onto the street before I took this photo. With ice cream in hand, snapping this photo seems to be what appeared suspicious to the military personnel keeping an eye on me. (Janelle Kaz/) 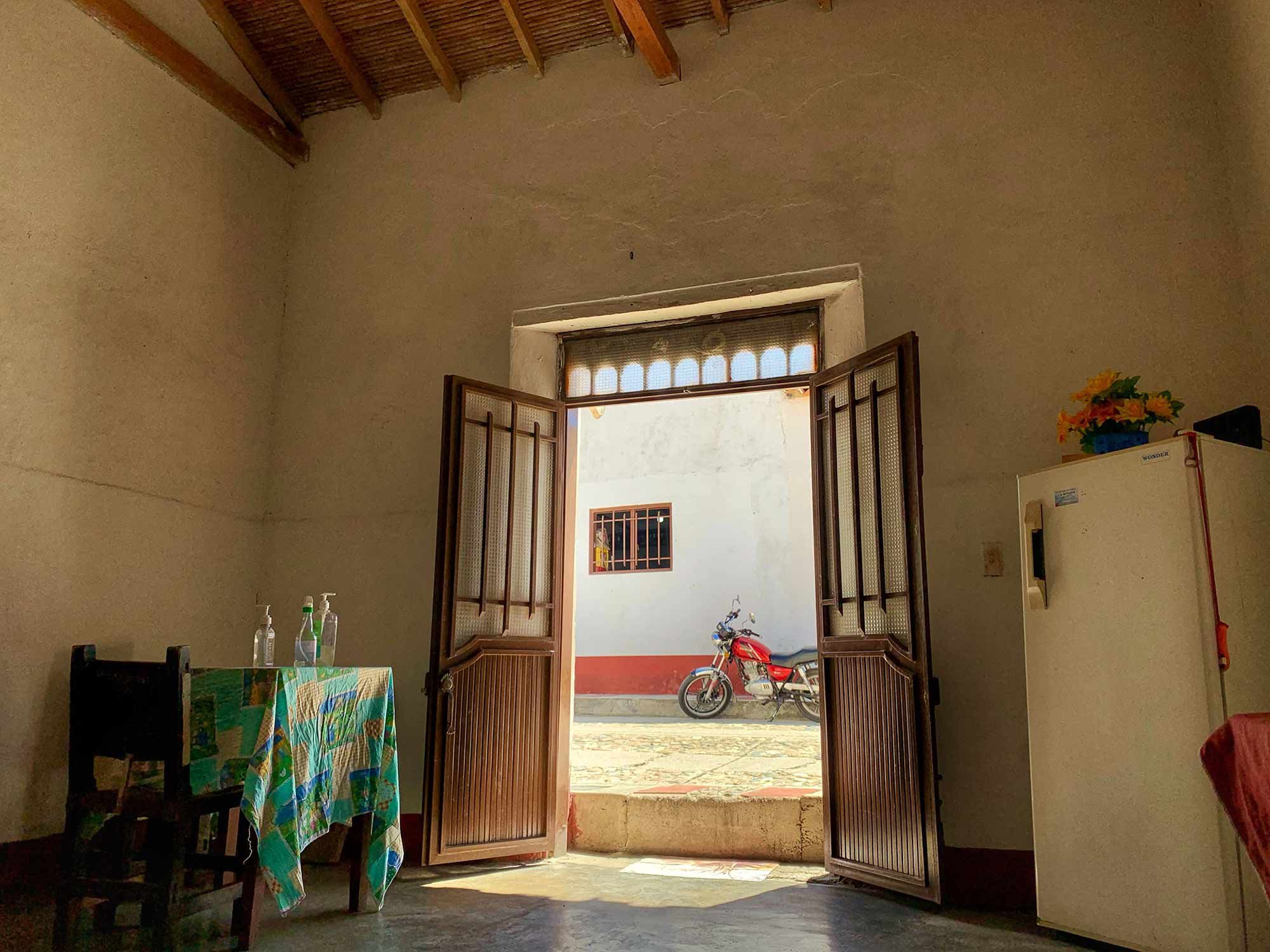 From inside a local restaurant, with La Negra at my feet. Motorcycles are the most common method of transportation around here; I hope you enjoy the many photos I took of them throughout the town. (Janelle Kaz/)

Flipping through my passport, they asked what I was doing there, who told me to come there, how I got there, and where my motorcycle was — two separate times (it was parked at my guesthouse). I did my best to stay outwardly calm even though I could feel my body trembling with that familiar, electric surge of adrenaline.

Unsatisfied, they wanted to look through the photos on my phone, specifically the one I had taken around the corner. I complied, opening my phone to the most recent photo — that of a dirt bike with the illuminated iglesia behind it. He snatched the phone from my hands and began scrolling backwards in time, through images of the sunset and my walk through town, ceasing to swipe when he arrived at a selfie I had taken next to a ripening bunch of bananas and their large, pendulous flower earlier that day.

I suppose I appeared suspect on that corner, alone, outside of the plaza near the church, leaning up against the wall with my ice cream cone. I did not try to explain to them the somewhat embarrassing reality of why I intentionally hung back–because I prefer not to be stared at while I repeatedly lick something. 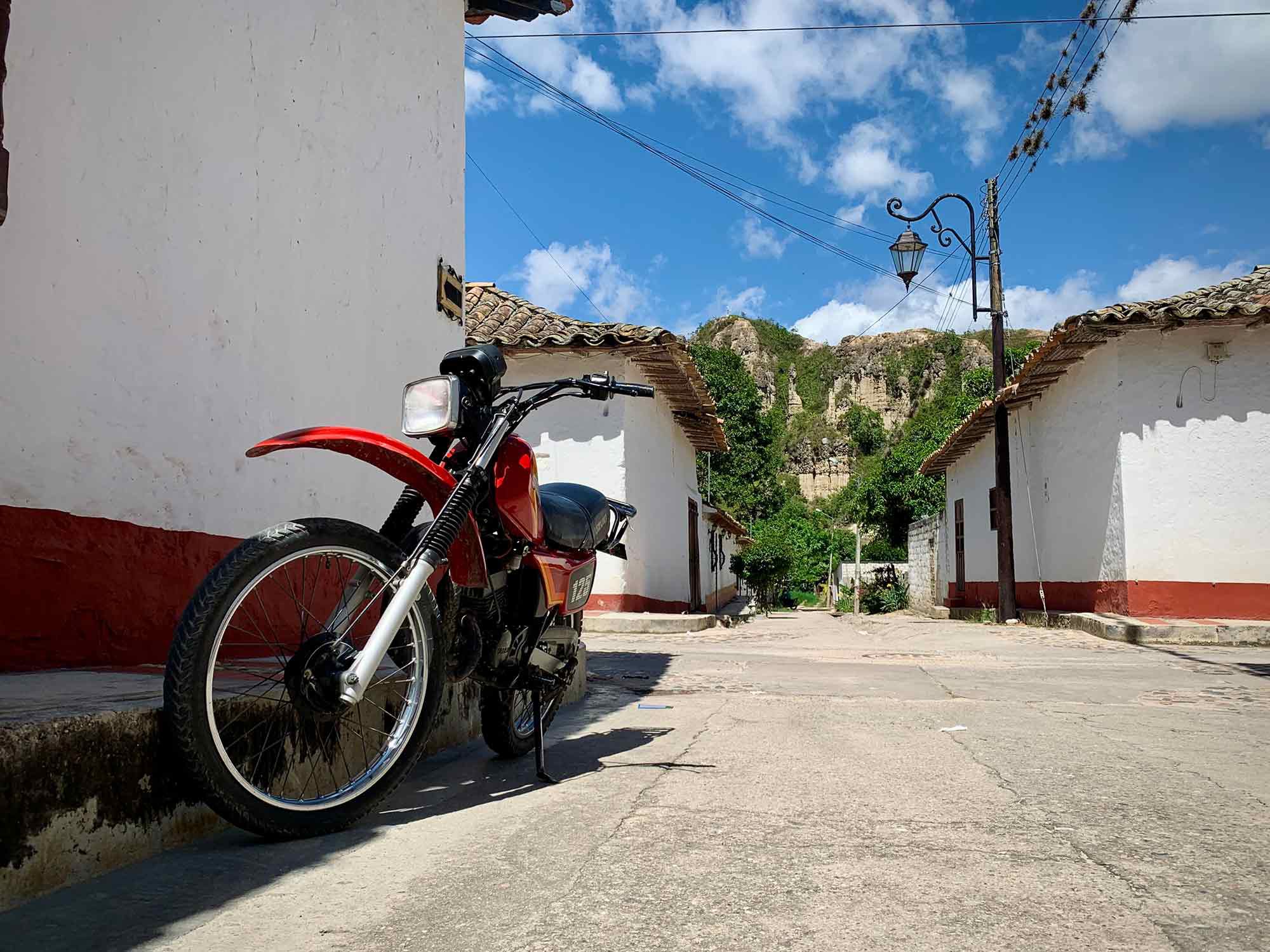 More of my local motorcycle photo tour through Playa de Belen. Walking these quaint streets, you can perceive the feelings of respect and affection the locals have with their town and their land by the care they show for their houses and streets. (Janelle Kaz/)

I have no idea what they thought my intentions were, but eventually they let me go, with an apology for bothering me.

Though I avoided that particular corner from then on, I can’t really blame those soldiers for being hyper-vigilant in a red-zone, an area still in conflict due to rebel groups and laden with drug trafficking into neighboring Venezuela. After riding more than 17,000 miles solo in South America, this isn’t the first zona-roja I’ve traveled through. Between the eastern ridge of the Peruvian Andes and the Amazon basin, I was stopped on the road by people with rifles resting on their shoulders, asking for money in exchange for “protecting” the road. They were not police and they were not military– maybe they really were vigilantes keeping the road safe for travelers, or perhaps they were simply armed hustlers seizing an opportunity to take advantage of an area in strife.

This is cocaine country, afterall. The snorted powder alkaloid, extracted from the leaves of the coca plant by using gasoline, sulfuric acid, and cement powder, is not at all how the indigenous have consumed this sacred plant for millenia. The people chew the leaves or drink a tea infusion to help with altitude, for energy (similar to how we use coffee), and nourishment with its high quantity of vitamins, minerals, and protein.

Related: Motorcycle Touring In Colombia—Crossing The Trampoline Of Death 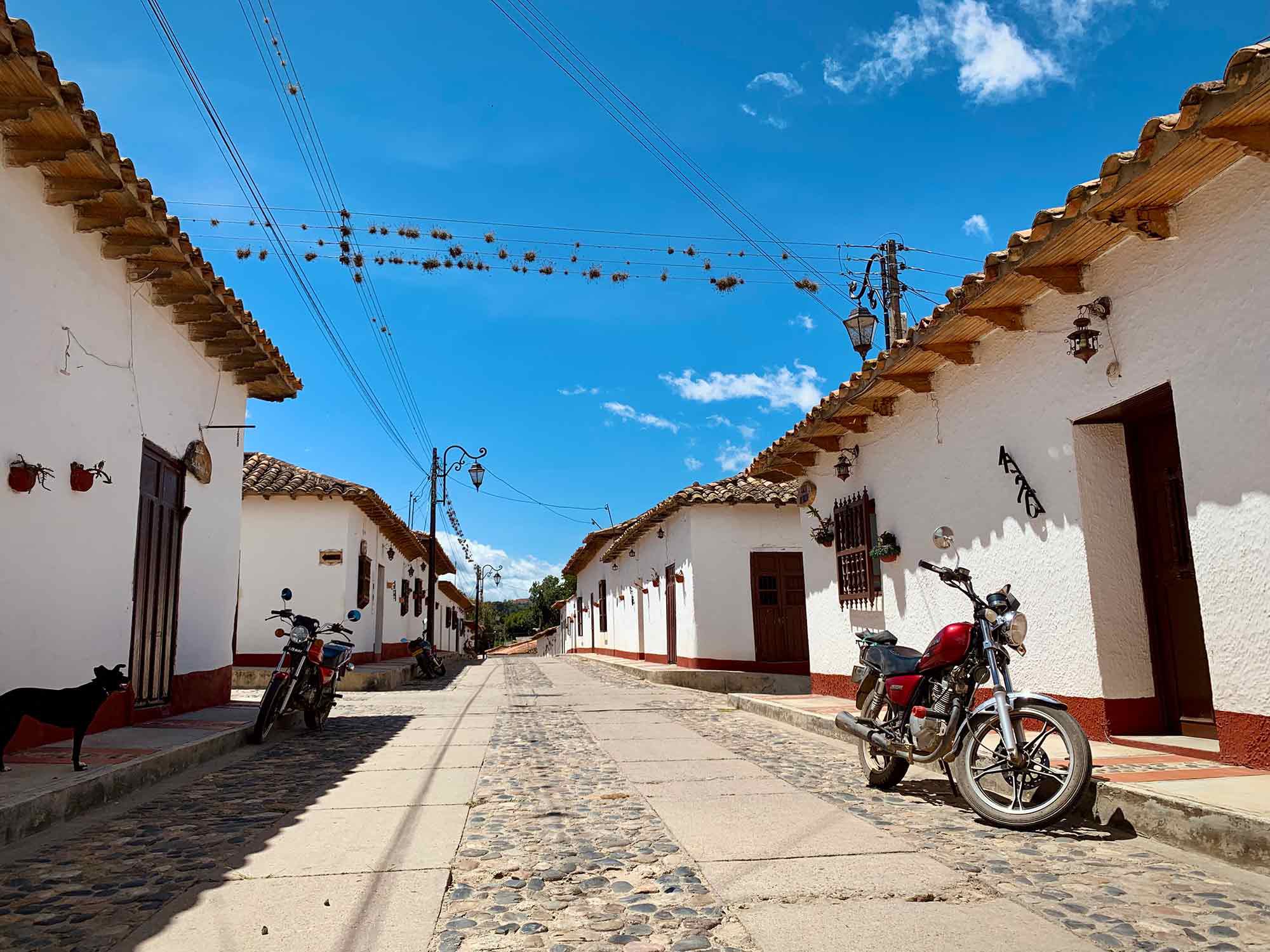 The only foreign tourist; Playa de Belen is one of the more difficult to reach of Colombia’s 17 Heritage Towns (Pueblos Patrimonios), and well worth the journey. (Janelle Kaz/) 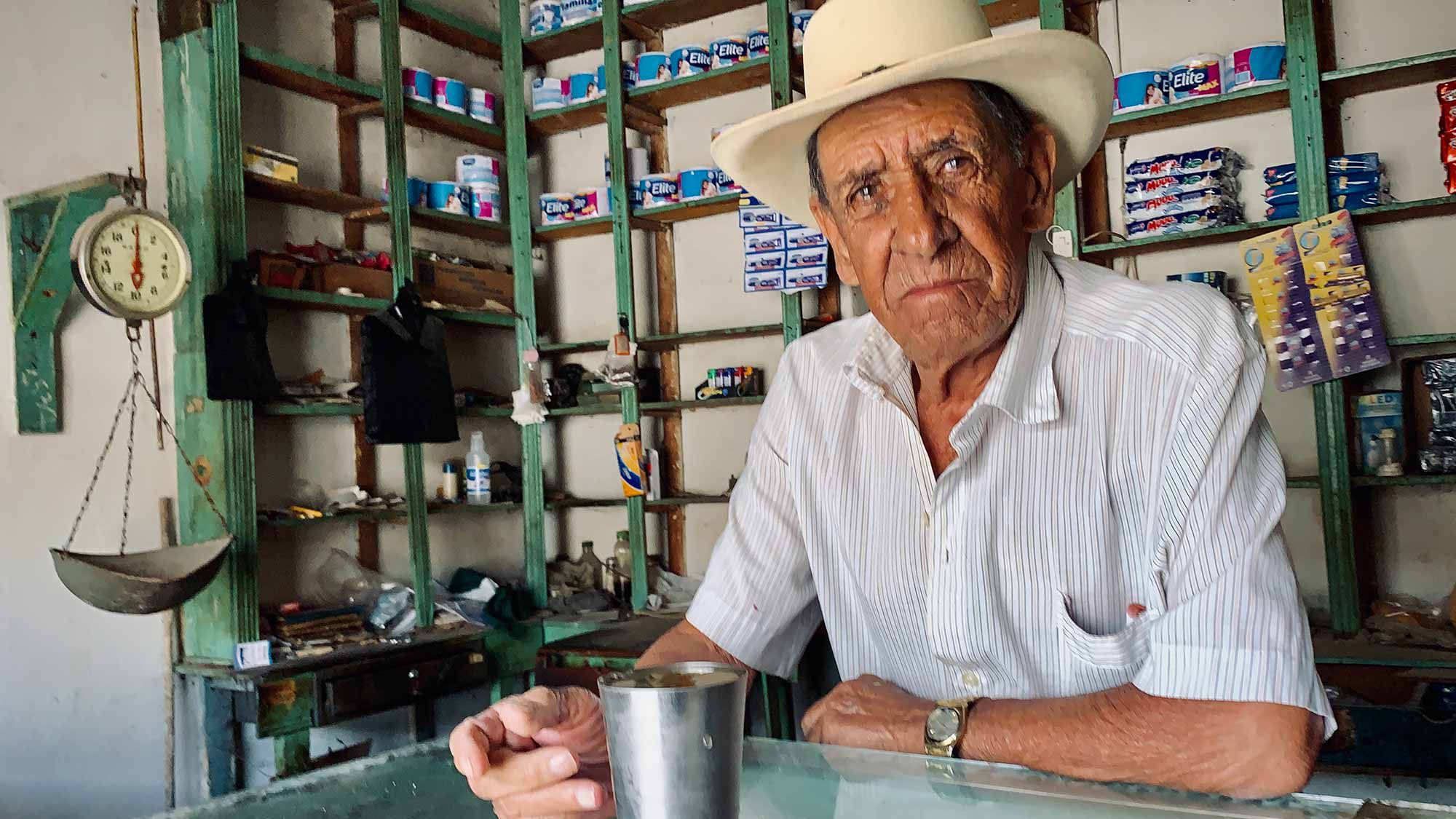 I was told I would find Guarapo here, a lightly fermented, effervescent unprocessed cane sugar drink. I expected to buy a bottle of it to take with me, but this <i>caballero</i> filled an aluminum vessel and set it in front of me to drink on the spot. (Janelle Kaz/)

Despite exhaustive efforts and billions of US dollars, Colombia and Peru are producing more cocaine than ever. Keeping substances like cocaine illegal, rather than regulated and taxed, only fuels violence while the powerful rake in the illicit wealth. After more than 50 years of civil war in Colombia that would not have lasted more than a week without profits from the drug trade, and more than 240,000 dead, 7 million internally displaced, it is clear there are those who would rather this “war on drugs” not end.

Change is the only constant in life, whether it be people, landscapes, politics, or the safety of certain roads and regions in Colombia. As anthropologist and author, Wade Davis, describes, Colombia isn’t a place of drugs and violence, it is a land of “colores y cariños,” with an astounding array of natural, cultural, and ecological diversity.

The best way to experience such vast diversity is while traveling Colombia by motorcycle, from snow-capped volcanoes to coastline to lush jungle and back up again. In addition to unparallelled landscape-diversity, Colombians might just be the friendliest people on the planet. Extremely warm, welcoming, and helpful, Colombians are always offering to help with any directions or route advice you might need. They all talk to each other kindly, and call one another “veci,” for vecino, which means neighbor.  They love to give saludos (respectful salutations) and to talk about anything around them in passing. “This pothole in the road is very dangerous, it just keeps getting worse. 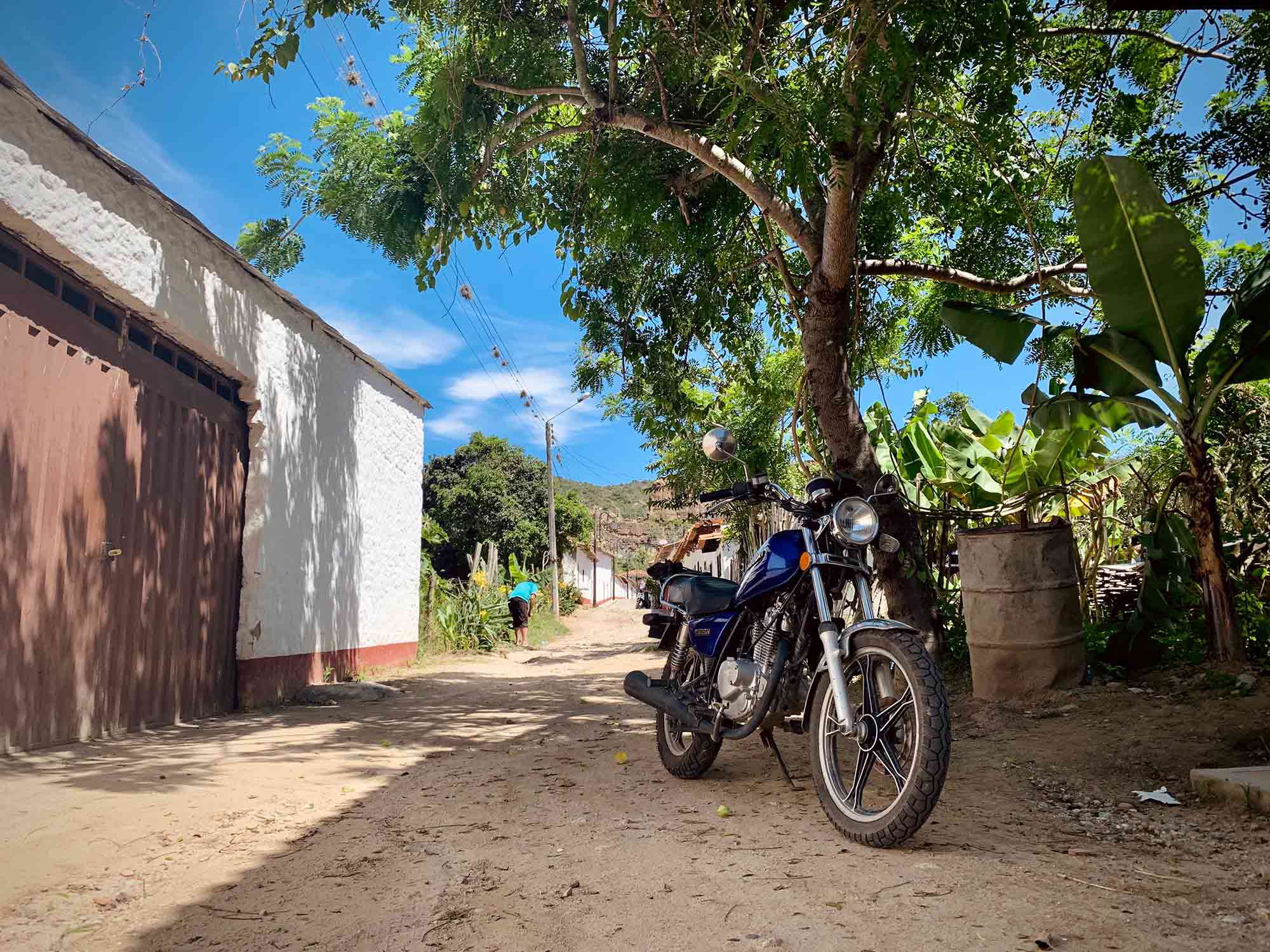 They say a rough stretch of road will teach you more about yourself than a century of quiet. (Janelle Kaz/)

Related: Trapped Abroad On A Motorcycle Trip During Coronavirus 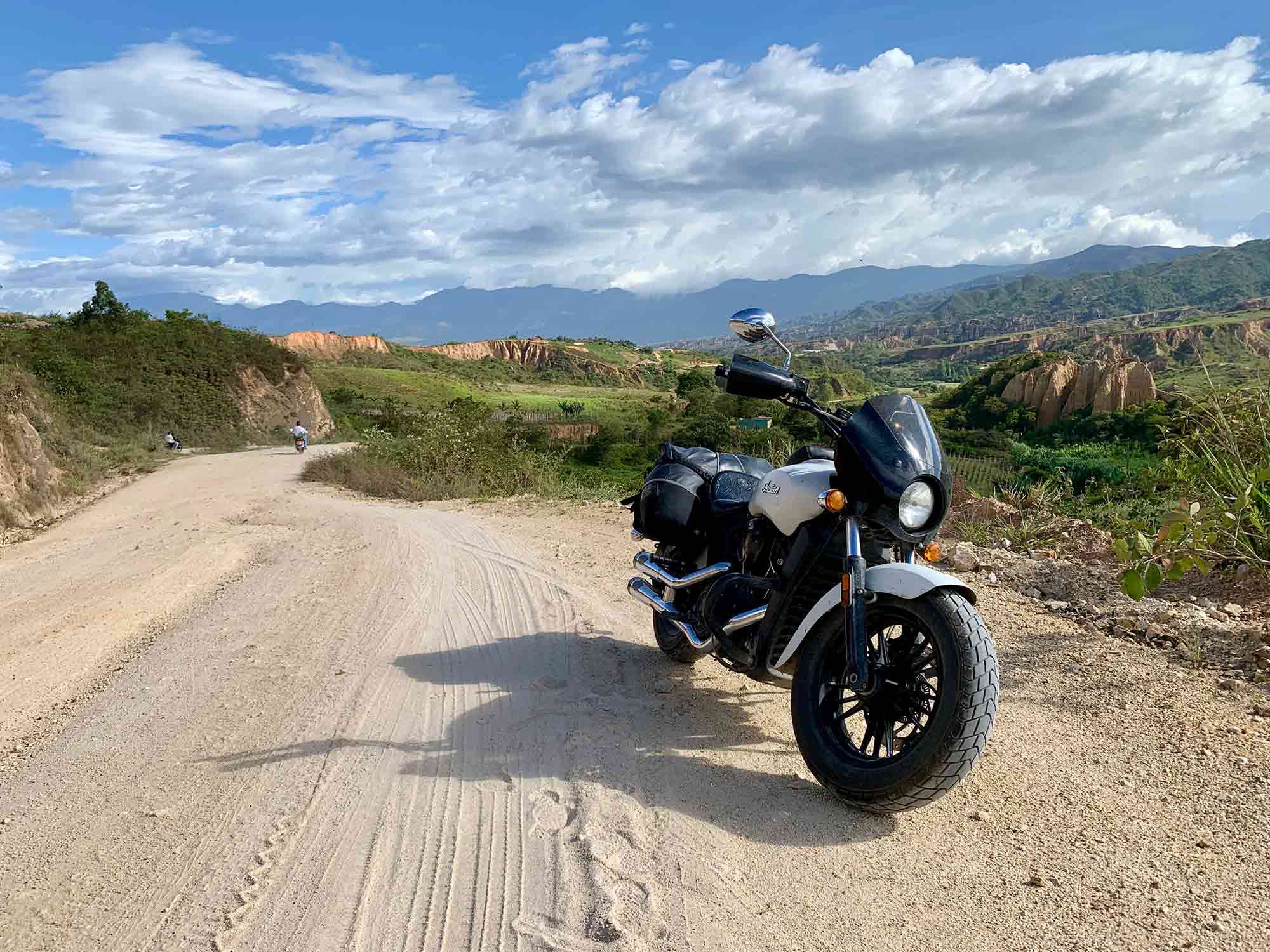 The dirt road leading north out of Playa de Belen, surrounded by wind and rain carved sandstone. Apparently there used to be a cave nearby but it collapsed. (Janelle Kaz/)

I realize I’m lucky to have explored this country more than the majority of its citizens, who for so long were unable to safely move around for fear of armed militia groups, funded by the illegal sale of cocaine. In the countryside, the sight of a foreigner traveling brings about a sense of happiness for the locals, as they recognize it as a sign of progress, a shift towards a more peaceful existence in such beautiful terrain.

Rather than heading any further towards the border of Venezuela, I rode out of Playa de Belen the same way I had come. On the way towards the main road, a section of the PanAmerican Highway called Ruta del Sol, I was stopped by yet another five military personnel — all males this time. I pulled over, slowly, and when I lifted my face shield to talk to them, I heard only audible elation to see that I was female. They didn’t ask to see my documents but instead, had a lot of questions about my motorcycle and my route. They wished me a safe journey after taking a few photos with me.

Related: How To Have A True Motorcycle Adventure In Ecuador 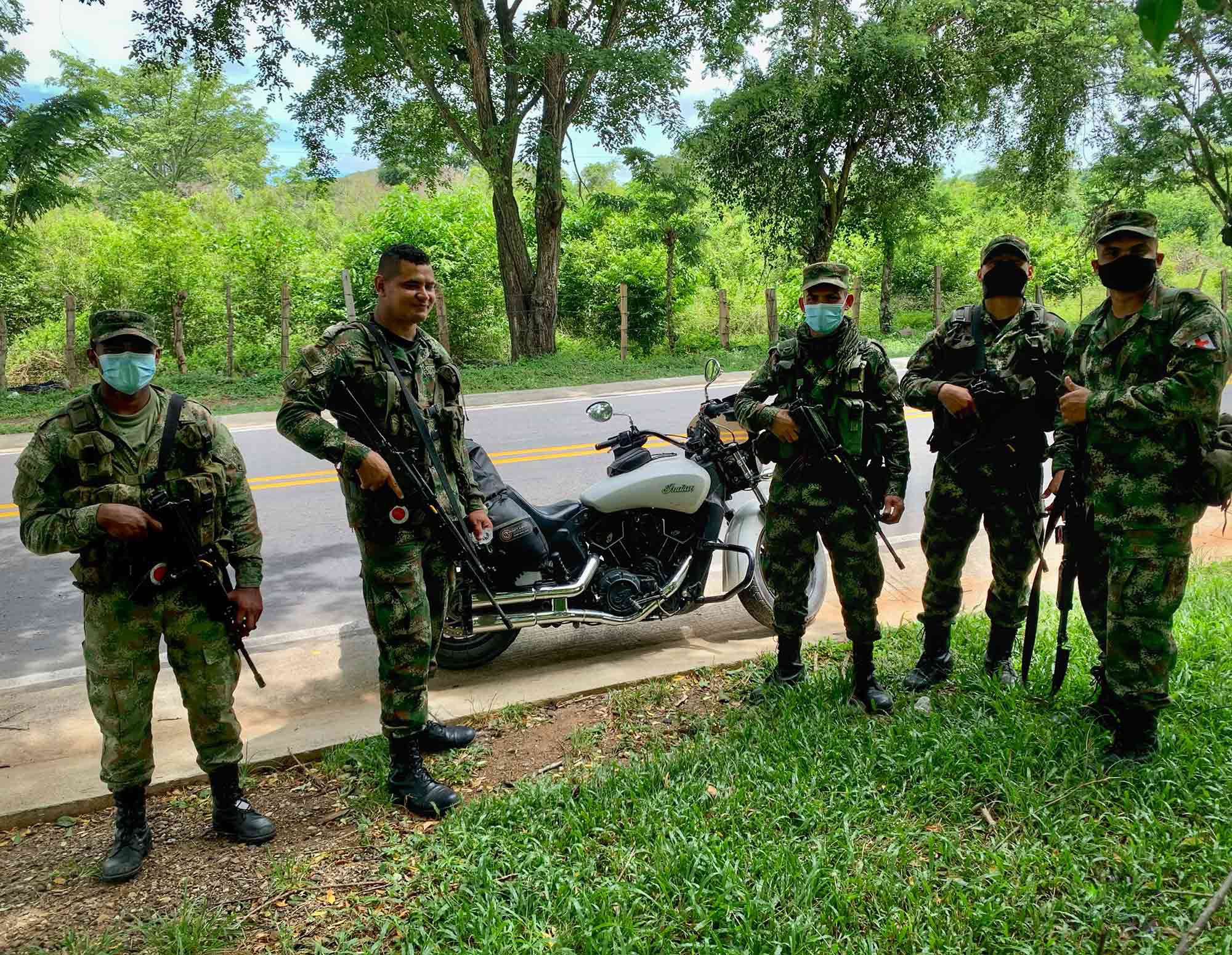 The military along the Ocaña-Cucuta road is present to prevent much of the illicit activity that exists around the Venezuelan border. (Janelle Kaz/)

While it’s clear I ventured into an area that does not receive many foreign tourists, and that some areas of Colombia remain off-limits for exploring, there is still an abundance of quaint towns and breathtaking landscapes in which to enjoy sunsets and frozen desserts, preferably while not being frisked. 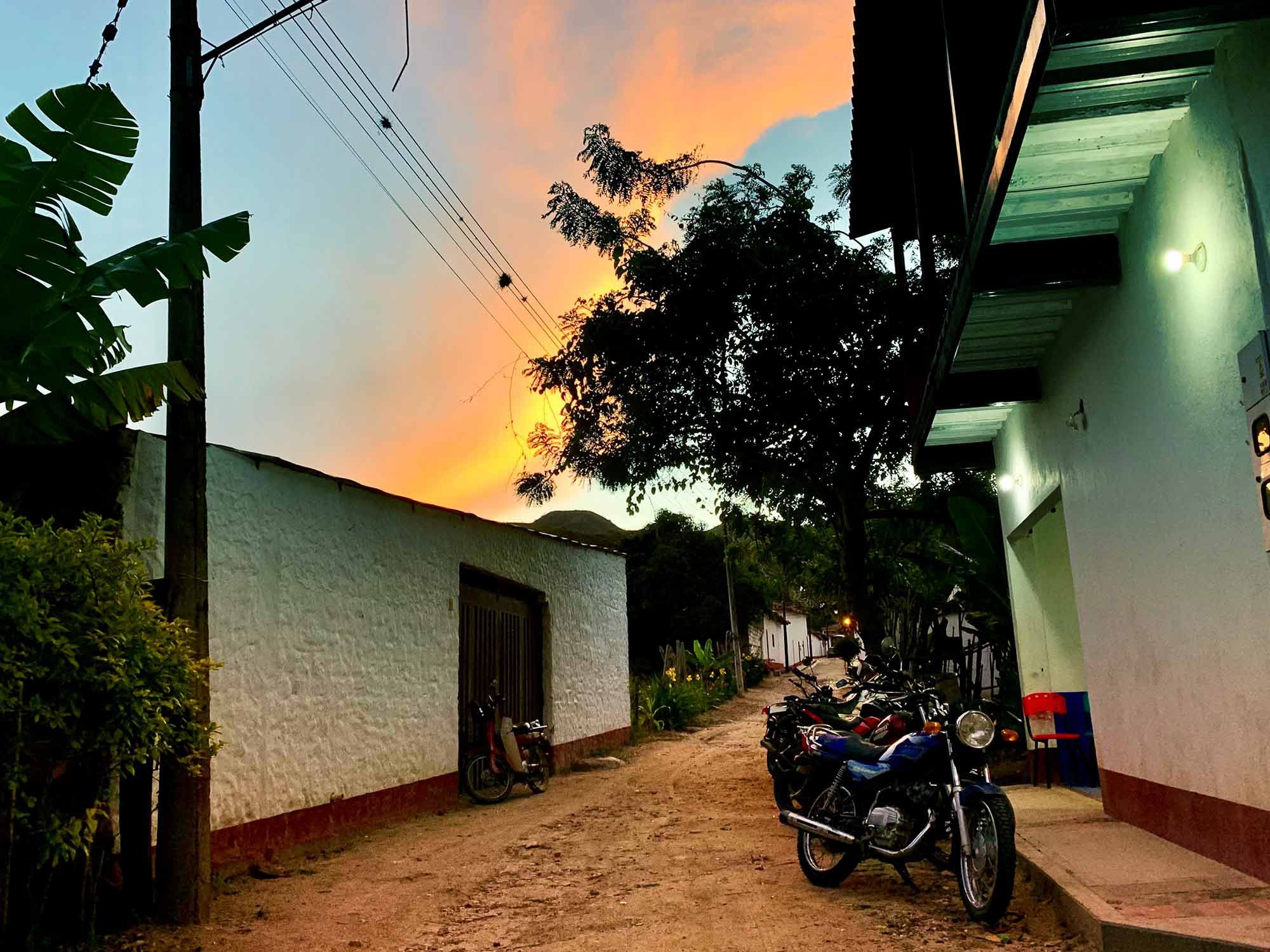 The last photo of the military’s swipe before handing me back my cell phone. I guess it was at this point in my photo history that he realized I was, indeed, a tourist. (Janelle Kaz/)

Related: Riding An Indian Scout Sixty In The Sacred Valley Of Peru